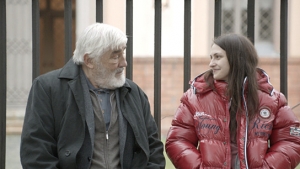 Mena’hem Teitelbaum, a survivor of Nazi concentration camps, has been running from his experience all his life. But instead of running away from a place, he has been running away from himself. What the Nazi-system and gas chambers did not bring to an end, he has completed. He has killed the Jew inside him. This was for him the only way to forget about the horror, the torture, the drama. His new person, Marcus Schwartz, moves to Cologne where he is free to become a "normal" German. With no Jewish friends, nor family, nor wife, nor synagogue. This is his way of outflanking his own fate: pretending that nothing happened, when everything happened, when the worst happened.

After years of working as a translator, he now is an old man. One day, as he strolls along a Jewish graveyard, all his past unexpectedly befalls him. Between the graves, suddenly a momentous wish in him arises: when he dies, he wants to be buried there. But in order to be buried there, you have to be Jewish and, much to his surprise simply being Jewish is not enough. A Rabbi points it out clearly to him: "If you say you’re Jewish, you have to prove it!"

But how could he, when all the last traces have been eliminated many years ago? How can he make the Shoa institutions believe that he is Mena’hem Teitelbaum, who was deported from Hungary in 1942 together with all his family? He shows them his tattoo, but this is not proof.

The only solution for Marcus is to go back to his hometown to find evidence of his Jewish birth. A young girl named Gül is deeply moved by his story and offers to drive him to Hungary – she knows exactly what it means to feel lost and uprooted. Together, the two take off for the heart of old Jewish Europe and as two worlds, two visions and two eras merge, an unexpected bond evolves.