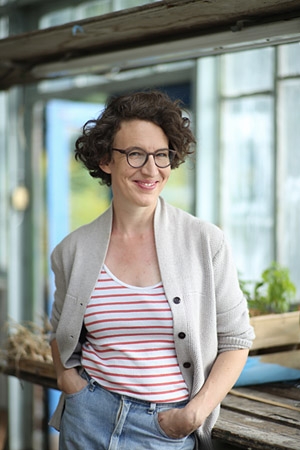 Lola Randl, born in Munich in 1980, studied in the department of film and TV at Kunsthochschule für Medien Köln from 2001 to 2005. In 2007, she also graduated from Drehbuchwerkstatt München. Prior to that, Randl had already finished a number of short films, including "Geh aus mein Herz" (2002), "Verena Verona" (2006), and "Wohlfühlwochenende" (2006). In 2009, she won the Prix UIP Berlin (European Short Film) at Berlinale for her short film "Der Geburtstag" ("The Birthday"), the third part of the trilogy "Die Leiden des Herrn Karpf" ("The Sufferings of Mr. Karpf") that she had developed together with Rainer Egger. Lola Randl made her feature-length debut with "Die Besucherin" ("Days In Between"), starring Sylvana Krappatsch and André Jung in the leading roles. The film opened in cinemas in May 2009.

The production of her next film "Die Erfindung der Liebe" had to be stopped in the summer of 2011, after actress Maria Kwiatkowsky tragically  passed away at the age of 26.

Randl went on to direct "Die Libelle und das Nashorn", a comedy about a young writer (Fritzi Haberlandt) and an aging actor (Mario Adorf) who spend an eventful night in a first-class hotel. The film premiered at the 2012 Munich Film Festival. At the same time, she re-wrote the script for "Die Erfindung der Liebe", and production of the film resumed in the summer of 2012. The story was changed in order to include the scenes which have already been filmed with Kwiatkowsky in the final cut.

Lola Randl was responsible for the acclaimed TV documentary series "Landschwärmer" (2014-2015), in which she accompanies successful urbanites who vacate in the countryside in order "to get back to nature", which leads to revealing and highly entertaining clashes between desire and reality. Randl's next feature film "Fühlen Sie sich manchmal ausgebrannt und leer?" ("Do You Sometimes Feel Burned Out and Empty?", DE/NL 2017) premiered at the 2017 Munich Film Festival and stars Lina Beckmann as a career woman and mother who is suddenly confronted with the existence of her very own doppelganger.