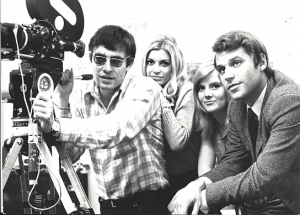 We already know just how wild, unpredictable, sensual, audacious and bursting with life German cinema can be from the film essay "Verfluchte Liebe deutscher Film" ("Doomed Love – A Journey through German Genre Films"). Now Dominik Graf and Johannes Sievert continue their archaeological adventure tour to the margins, the underbelly, but also to the heart of German film and television, posing some valid questions along the way: why does public television no longer commission such prescient science fiction films as "Smog" (1973)? Why isn't German cinema able to establish a more audacious relationship to genre? As in Carl Schenkel's "Abwärts" ("Out of Order", 1984), for example, all it takes is a lift that gets stuck in an office building to make a claustrophobic psycho-thriller. Why do young directors not follow in the footsteps of the unruly Klaus Lemke, who simply shoots his films from the hip? And why do those who do get denied funding? The excerpts from these film and television marvels – such as "Slavers - die Sklavenjäger" or "Liebling - ich muss dich erschießen" certainly make one want to run out and see them at once. Sadly, in many cases all that's left of these lost treasures are the trailers or posters.