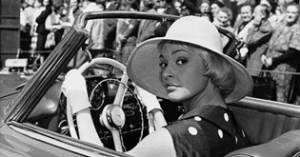 West Germany in the 1950s. Rosemarie, a pretty young street musician, meets the influential tycoon Konrad Hartog by chance. Hartog, one of the leading personalities of the West German "Economic Miracle", is a member of a powerful cartel that is working with the government on a secret project. Hartog begins an affair with Rosemarie, and finally even pays for her apartment and gives her a generous monthly allowance. When the French spy Alfons Fribert gets wind of the affair, he realizes that Rosemarie could be his ticket to finding out the cartel′s secret.

Fribert takes Rosemarie under his wing and helps her become West Germany′s most exclusive call girl; her clients are the wealthiest and most powerful men in the country. In exchange, Rosemarie allows Fribert to record all the conversations she has with her clients. When the cartel finds out about the recordings, Hartog tries to save her by offering to pay her a large amount of money for the recordings. Rosemarie, however, wants more than just money; she wants to finally be accepted by society. But by refusing Hartog′s offer, Rosemarie has sealed her own fate. The cartel must keep its secret at all costs...