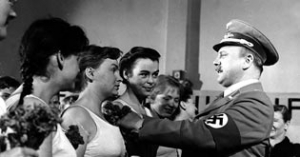 The Devil Came at Night

Germany during the Second World War. For eleven years a serial killer has remained on the loose. Shortly before the end of the war, the investigating inspector is able to capture the culprit – a mentally retarded man. Due to the rather precarious situation, doubts begin to arise about whether is it wise to arouse public attention in a trial process highlighting the 11 year failure of the German police in their attempts to capture a dim witted murderer. It is decided to execute him without a trial. Another „culprit“, however, has now to be found so that he can take the place of the true murderer and be presented to the public. Getting to feel scruples with the whole affair as well as wanting to bring the truth to light, the inspector gets demoted and sent to the front as a soldier.