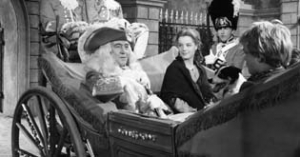 The Girl and the Legend

Daniel Defoe, author of the successful novel "Robinson Crusoe", lives in poor conditions as a subtenant with the mother of young Maud. To support the family, Maud works with her brothers in a cotton mill. The children enjoy listening to the stories of the old man, who has fallen out of favor with the king because of his Robinson novel, when too many sailors have followed Robinson's example and fled to deserted islands.

In his private life, too, Defoe is plagued by serious worries: he has long been at odds with his son Tom, who seems to despise him. When Tom is threatened with imprisonment because of high debts, Maud sees the opportunity for a reconciliation between father and son. She herself puts her freedom at risk for this. But instead of seeking an agreement with his father, Tom steals his father's manuscript of "Robinson Crusoe" in order to buy his freedom with the proceeds. Now Maud and her brothers do everything they can to find Tom, buy back the manuscript and bring father and son together after all.