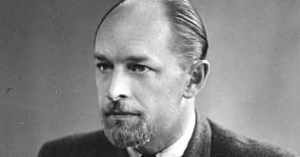 Paul May was born on May 8, 1909, under the name Paul Ostermayr in Munich. He was bound to start a career in the film business: His uncle Franz Osten worked as a director and his father, Peter Ostermayr, also became known as a director but mainly as the founder of Emelka-Filmgesellschaft (that later became Bavaria-Filmgesellschaft) and as the constructor of the first film studios in the Munich suburb Geiselgasteig.

After graduating from high school in Feldkirch, Paul May attended an extensive apprenticeship in several branches of the photography and film business – he attended Staatslehranstalt für Lichtbildwesen, worked at Ufa’s experimental laboratories, and received practical training for individual production steps at printing laboratories and in film ateliers.

From 1930 on, he participated as a cutter in the production of several films and worked with directors like Hans Deppe, Max Ophüls, and Harry Piel. From 1933 on, he also worked as an assistant director, again often for Hans Deppe with whom he adapted several novels by the writer Ludwig Ganghofer for the movie screen as Peter Ostermayr held the exclusive rights of Ganghofer’s works. For Peter Ostermayr’s production company Tonlicht-Film GmbH, Paul May also realized "Der Edelweißkönig" (King of the Edelweiss"), his first project as a director, in 1938.

May’s early career stages as a director were mainly influenced by his father’s stock of sentimental film projects: He, for instance, finished "Waldrausch" ("Forest Fever", 1939) and "Links der Isar – rechts der Spree" (1940) during this period. With "Violanta" (1942), a film version of Erich Zahn’s novella "Der Schatten", he started to loosen his family ties. From then on, he worked under his stage name, for different film production companies, and in different genres. He, for instance, finished the crime film "Die Nacht der Zwölf" (1948), and, together with G. W. Pabst, the post-war film "Duell mit dem Tod" (1949). However, his production company Orbis-Filmproduktion did not turn out as a success. Between 1949 and 1953, the company finished only one film, "König für eine Nacht" (1950).

In the early 1970s, Paul May withdrew from the film business. He died on February 25, 1976, in Taufkirchen near Munich.