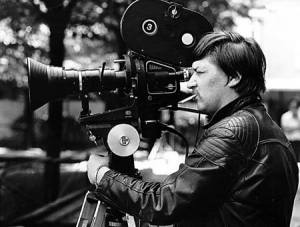 Born on May 31, 1945 in Bad Wörishofen (Allgaeu), Rainer Werner Fassbinder grew up in Munich. He was the only child of the doctor Helmut Fassbinder and his wife, the translator Liselotte Fassbinder, née Pempeit. After his parents got divorced in 1951, he went to live with his mother and attended schools in Augsburg and Munich. He left school in 1961 before any final examinations. From 1961 until 1963, he lived in Cologne, and from 1963 until 1966, he took acting classes in Munich. In 1966 and 1967, he failed to get accepted at the newly-founded German Film and Television Academy in Berlin. In 1966/67, he made his debut as a director, writer and actor with the short films "This Night", "Der Stadtstreicher" ("The City Tramp"), and "Das kleine Chaos" ("The Little Chaos").

In 1967, Fassbinder joined the Munich Action-Theater, at first as an actor and later as a director and writer. In 1968, he directed his first stage play "Katzelmacher". In the same year, he co-founded the "antitheater" alongside Hanna Schygulla, Peer Raben and Kurt Raab. Fassbinder's first feature film "Liebe ist kälter als der Tod" ("Love Is Colder Than Death") was met with somewhat lukewarm reception at the 1969 Berlin International Film Festival. His artistic breakthrough came the very same year with the film adaptation of his stage play "Katzelmacher", which won him several awards, including the German Film Award. Hence, he was celebrated as "the wunderkind of German cinema" and his efficiency as a director was the cause of much astonishment: In addition to his stage and radio work, Fassbinder managed to shoot as many as eleven movies in 1969/1970.

After his "antitheater" had come to an end, Fassbinder founded his own production company Tango-Film. In "Der Händler der vier Jahreszeiten" ("The Merchant of Four Seasons", 1971), which won the German Film Award, Ingrid Caven (Fassbinder's wife from 1970-72) played the love interest of a former foreign legionnaire who now earns his living as a fruit merchant. In 1972, Fassbinder adapted Franz Xaver Kroetz's stage play "Wildwechsel". Not unlike Andy Warhol's "factory" method of production, Fassbinder usually worked with a fixed team of actors, cinematographers, musicians, and stage designers. His very personal movies combined folk play elements with elements from melodramatic movies and gangster films.

In 1973, Fassbinder shot "Angst essen Seele auf" ("Ali: Fear Eats the Soul"). Based on Douglas Sirk's "All That Heavens Allows" (1955), the movie starred Brigitte Mira and his then-boyfriend El Hedi Ben Salem. One of his biggest popular successes was "Fontane Effi Briest" (1972–74), a black-and-white adaptation of the novel by Theodor Fontane. In "Chinesisches Roulette" ("Chinese Roulette", 1976), starring Anna Karina, as well as the Nabokov adaptation "Eine Reise ins Licht – Despair" ("Despair", 1977), starring Dirk Bogarde, Fassbinder worked with international stars for the very time. In October 1977, Fassbinder directed a 26-minute episode for the omnibus film "Deutschland im Herbst" ("Germany in Autumn"), which distinguished itself by its brutal honesty.

"Die Ehe der Maria Braun" ("The Marriage of Maria Braun", 1978/79) was the first part of a trilogy that focused on women's destinies: While "Die Ehe der Maria Braun" saw Hanna Schygulla as a woman in post-war Germany who emancipates herself, "Lola" (1981) revolved around a small town prostitute (Barbara Sukowa) in the 1950s. In "Die Sehnsucht der Veronika Voss" ("Veronika Voss", 1981/82), he told the story of a morphine-addicted former actress (Rosel Zech). "Lili Marleen" (1980), starring Hanna Schygulla, was loosely based on the life of Lale Andersen.

Having worked for television before, e.g. on the unusual family series "Acht Stunden sind kein Tag" (1972), Fassbinder adapted Döblin's novel "Berlin Alexanderplatz" in 1979/80. The 14-part TV series starred Günter Lamprecht as Franz Biberkopf and Barbara Sukowa as Mieze. Despite having produced "Berlin Alexanderplatz" for television, Fassbinder had no regard for conventional TV series dramaturgy, small screen visuals or the viewing patterns of the general TV audience. His last movie, the homosexual romance "Querelle" (1982), was based on a novel by Jean Genet. Aside from starring in his own movies and those of his "group", Fassbinder has also worked with other directors.

Following his early death on June 10, 1982, several biographies (written by Gerhard Zwerenz, Kurt Raab/Karsten Peters, and Harry Baer) were published within a few months of each other. In 1984, Eva Mattes portrayed the eccentric director in the film a clef "Ein Mann wie E.V.A." ("A Man Called Eva").