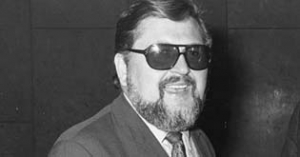 Horst Otto Grigori Gubanov was born on 15 March 1922 in Criewen near Schwedt an der Oder. His father Gregor Gubanov was a Russian agricultural worker, his mother Auguste, née Klempnow, was German. He grew up with Fritz and Minna Wendlandt, a sister of his mother's, who adopted him in 1944 and whose name he took.

In 1937, after attending a higher commercial school, he began an apprenticeship at the production company Tobis-Filmkunst, which took him over as cashier in 1939. In this function he worked for Tobis, first in the studios of Berlin-Johannisthal, and in 1944 for the Grund production group in Prague. He was threatened with imprisonment in an internment camp because, despite his adoption, he was still considered a Russian citizen. He therefore voluntarily joined the Luftwaffe and at the end of 1944 moved to Fuerth to join the Fliegerersatz-Bataillon 12. In 1945 he was taken prisoner by the Americans. For two years he worked as a forced laborer in a French mine in Merlebach, and was released at Christmas 1947.

Back in Berlin, he tried to gain a foothold in the film business again, initially working in his old profession as a cashier for Carl Froelich. From 1951-54 he was managing director of Waldemar Frank's Central Europe Film, and as production manager he directed operetta films and light comedies such as "Die Rose von Stambul" ("The Rose of Stamboul"), "Ball im Savoy" ("Ball at the Savoy"), "Der Vetter aus Dingsda", "Schützenliesel" and "Musik im Blut" ("Music in the Blood").

On November 1, 1960, Wendlandt became head of production at Rialto Film Preben Phillipsen Filmproduktion und Filmvertrieb GmbH, a company of the Danish distributor, producer and cinema owner Constantin Preben Phillipsen, who had already played a major role in the founding of Constantin-Verleih.

Rialto created the Edgar Wallace series already in 1959, while still based in Denmark. After Wendlandt's entry, the company moved its headquarters from Copenhagen to Hamburg, then to Berlin in 1962 and the Wallace series became the core of the Rialto production. Under his aegis, a total of 36 Wallace thrillers were produced until 1972, mostly in studios in Hamburg and Berlin, probably the most long-lived and successful film series in Germany after the war.

Almost all Rialto films were distributed by Constantin from 1962/63 onwards, after Wendlandt liquidated the distribution company Prisma, affiliated with Rialto, in 1961.

In 1962, the first Karl May adaptation, "Der Schatz im Silbersee" ("The Treasure in the Silver Lake"), was produced in co-production with Jadran Film, Zagreb, directed by Harald Reinl. The film sets off a wave of German westerns; as with the Wallace series, other producers tried to copy or plagiarize the successful concept. Especially with Artur Brauner's CCC, Wendlandt was involved in disputes about copyrights and exclusive rights, some of which had to be settled in court.

By 1966, Rialto had released a total of nine Karl May films, almost all of which were among the most successful German films of the year. In France, Italy and countries of the Eastern Bloc (via the Jadran distribution network) the German Western films also sold well, and even the Anglo-Saxon critics described the Karl May films more or less benevolently as "Sauerkraut Westerns".

Attempts by Wendlandts in the late 1960s to gain a foothold in other genres were not always particularly successful.

In the 1970s Wendlandt shifted his focus more and more to film distribution. In 1970, he acquired the German remake rights to ten feature-length Charlie Chaplin films and founded the Tobis-Filmkunst distribution company in 1971. The move paid off, the Chaplin films became an unexpected box-office success.

Under Wendlandt's leadership Tobis continued to demonstrate a sure instinct for buying rights with the Terence Hill/Bud Spencer films, Louis de Funès comedies or action adventures with Jean-Paul Belmondo (Tobis also acted as co-producer for some of these films). From the mid-1970s on, Wendlandt also became involved in the field of European auteur films, for example as co-producer of Claude Sautet's "Une histoire simple", Ingmar Bergman's "The Serpent's Egg" or Fassbinder's "Lola" and "Die Sehnsucht der Veronika Voss" ("Veronika Voss").

At the beginning of the 1980s, Wendlandt withdrew from film distribution to focus exclusively on production again. Since 1972 he had held all shares in Rialto, which he bought from his former partner Phillipsen. In the 1980s, Wendlandt's films continued to appeal to the public; his comedies with Otto Waalkes, Loriot and Hape Kerkeling ranked high on the scale of success in German productions.

Yet, already from the 1960s onwards, Wendlandt's reputation among German film critics was less positive. Along with Artur Brauner and Luggi Waldleitner, the most prominent representatives of "Papas Kino" ("Papa's cinema"), which was declared dead in Oberhausen, Wendlandt's films still polarize the audience and their opinions today.

Horst Wendlandt had been married to Ilsegard Winter since 1950, his son Matthias (born 2.9.1952, originally trained as a doctor) and his daughter Susan Nielebock (born 1.6.1956) have also been working as producers for Rialto since 1987.