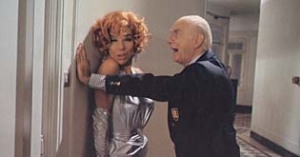 For three years now, Paul Winkelmann has been in charge of the furniture and decoration store that belongs to his family. But he has not become independent during this time. Paul is 56 years old and still lives with his 78-year old, but pretty fit and dominant mother who to this day calls Paul with his nickname "Pussi". One day, Paul meets the single psychologist Margarethe, his ideal female companion. She also is not getting any younger and still has not completely become independent from her family. Naturally, their acquaintance calls Paul's jealous mother into action, particularly because her son has decided to rent his own flat even at his age! But Paul and Margarethe do not give up. To relax the tense domestic situations, they want to introduce their parents to each other – but that soon turns out to be a bad idea.