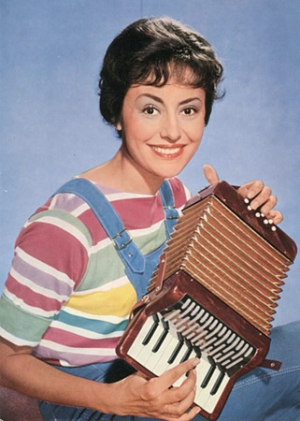 Caterina Valente was born in Paris on January 14th 1931. Her parents being renowned artists and musicians, she already began to perform live on stage at the age of five. In 1952, Valente, who was born into an Italian family married juggler Erik van Aro, thereby obtaining also a German citizenship. She started out as Aro's assistant, while he later became her manager. The marriage lasted till 1971, with both remaining close business partners and friends after the divorce.

In the spring of 1953, while performing at a musical circus, Valente also successfully tried out as a singer for Radio Zurich: On the spot, station manager Walter "Walo" Linder recorded fifteen songs with her. The following year saw Caterina Valente's breakthrough: She released her first record "Istanbul", and by fall, her German interpretation of Cole Porter's "Il love Paris" – titled "Ganz Paris träumt von der Liebe" – made it to the top of the German charts, followed by additional hit singles "Wo meine Sonne scheint" und "Dich werd ich nie vergessen".

She also made her screen debut that year, playing the supporting role of a singer in the crime caper "Mannequins für Rio". Starring roles followed in box-office hits like "Liebe, Tanz und 1000 Schlager" (1955) with screen partner Peter Alexander, and "Casino de Paris" (1957), co-starring Vittorio de Sica and Gilbert Becaud. Always playing characters named in some variation of Caterina, her roles were virtually tailor-made. But despite her success, she only appeared in few films at the beginning of the Sixties., while her musical career further expanded with international hits " Malaguena" and "The breeze and I" and engagements in the US.

Moreover, in September 1957 her first TV variety show "Bonsoir Kathrin" was aired in Germany, a highly successful format which was continued well into the 1970s. And she also triumphed abroad: In 1959, she had a one-month engagement at legendary Parisian concert hall "Olympia", scored a Grammy nomination as "Best Female Vocalist" and was awarded the "Grand Prix National du Disque" by the prestigious Académie Francaise. Two years later, the first Italian version of her TV show premiered under the title "Bonsoir Caterina", and a regular stint as guest star o the Perry Como Show also manifested her success in the States.

After numerous concerts, TV appearances and chart entries, she again made headlines with a concert tour in Russia, shortly followed by President Nixon's invitation to participate in a gala performance in Washington celebrating the 26th anniversary of the UN. Equally prolific was an exclusive concert for a member of Britain's Royal Family: On July 28th 1981, Caterina Valenta performed at a party for Prince Charles, who was to marry Lady Diana Spencer the next day.

In 1985, Caterina Valente was awarded the Bundesverdienstkreuz for her lifetime achievement and her extensive charity work. One year later, 16 million viewers watch the TV programme "Bravo Catrin" which celebrated her 50th year anniversary as a performer. The next years saw her gradually preparing her farewell from show business: In 1987, she gave her last US live performance at the Hollywood Bowl in Los Angeles. In 1989, she enjoyed sensational success with her Italian Jazz recordings "A briglia sciolta", which went on to become her best-selling record.

In 1996, she gave her last European concert at the opera house in Leipzig. In 2001, she released the critcally praised record "Girltalk", on which she is accompanied by harpist Catherine Michel. The album's last track is "Papa n'as pas voulu"– the very same song she performed in 1936, when she first entered the stage as an infant. On the occasion of her surprise appearance on the Italian TV programme "Paolo Limiti Show", she sang a duet with her son Eric van Aro Jr. It also marked Valente"s final public performance and her retirement. Today, Caterina Valente – who has two sons and was married to British composer Roy Budd between 1972 and 1980 – is alternately living in Switzerland and the United States.