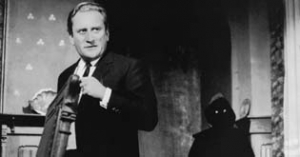 In the third of four film adaptations of the Edgar Wallace crime thriller "The Terror", a murderer and white-slaver who is masked as a monk terrorises the English castle of Darkwood where Lady Patricia heads a girls′ bording school. When the old lord of the castle dies, his inheritance is stalled by several mysterious deaths. Although Sir William and Sir Richard are carefully looking after their niece Gwendolyn, who is the sole heir, they cannot prevent an attempt on her life. Thus, Scotland Yard′s inspector Bratt and Sir John arrive at castle Darkwood to protect Gwendolyn and to disclose the secret of the sinister monk.