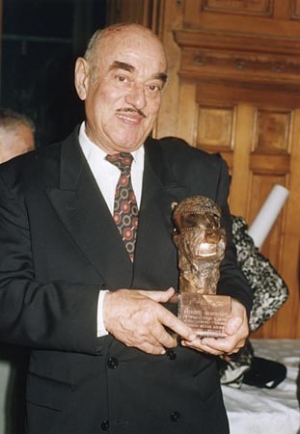 Born in Lodz/Poland in 1918 the eldest son of a Jewish timber wholesaler, Artur "Atze" Brauner survived the Holocaust and the Second World War with his parents and four siblings while 49 of his relatives perished in Nazi death camps. Directly after the end of the war, the 28-year-old Brauner came to Berlin and founded his production company Central Cinema Company (CCC) to produce "Morituri" (1948), a film with a heavily autobiographical character that was intended as a memorial to the victims of German racial hatred and intolerance. However, the film was a financial and personal fiasco for the young producer who saw that cinema at that time was "no place for coming to terms with the past" and decided to give the audience what it clearly wanted by concentrating on outright commercial entertainment.

Since the 80s, Brauner concentrated on political and socio-critical films like "The White Rose" ("Die Weisse Rose", 1982) by Michael Verhoeven, "A Love in Germany" ("Eine Liebe in Deutschland", 1983) by Andrzej Wajda, "The Rose Garden" (1989) by Fons Rademakers, and "Europa Europa" ("Hitlerjunge Salomon", 1990) by Agnieszka Holland, which was named Best Foreign Film in the USA on several occasions and received the Golden Globe in this category in 1992. He also received numerous German Film Awards, Golden Bears, and Golden Screens and was awarded the Golden Camera for his life's work and outstanding achievements for German cinema at the Berlinale.

Brauner was the holder of the First Class Order of the Federal Republic of Germany and had an honorary doctorate from the Interamerican University of Humanistic Studies in Florida. He died july 7, 2019, age 100.