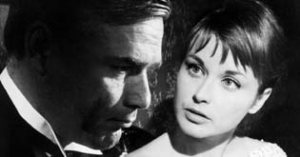 The Inn on the River

"The Shark" has struck again! There's a dead man floating on the Thames, pierced by a shark's harpoon. Sir John of Scotland Yard is putting Inspector Wade of the River Police on the case. His investigations lead him to Nelly Oaks, landlady of the harbour pub "Mecca", which belongs to her inconspicuous foster daughter Leila Smith and her admirer Mr. Brown, captain of the freighter "Seal of Troy". A few attacks and deaths later, it becomes ever more likely that Leila is in reality a rich heiress of millions, whose fortune the "Shark" wants to take into his possession. The criminal kidnaps the young woman, but after a wild chase, Wade can catch him and expose him.

Another screen adaptation: "The Return of the Frog" (GB 1938, Maurice Elvey)