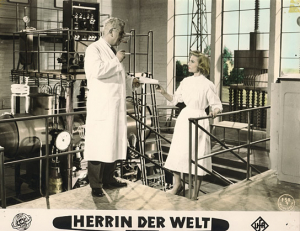 Mistress of the World

When the Swedish secret service learns that nuclear scientist Johanson has discovered a formula for producing massive amounts of energy, the agency immediately sends its agent Peter Lundström in order to observe Johanson. Lundström follows Johanson and his assistant, as well as his young daughter Karin. A huge explosion reveals the destructive power of the formula and devastates a large area. The injured Johanson is hospitalized , while Karin continues her father′s business. But now, sinister forces are trying to get hold of the formula. When Johanson plans to go into hiding at a monastery in Cambodia in order to protect his findings, a dramatic race against time begins.