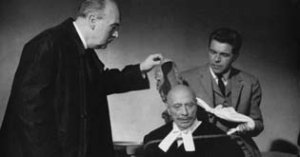 "Neues vom Hexer" is the second film of the Edgar Wallace series about the masked gangster "Hexer": The sudden death of the only heir to the Curtain family, one of London′s richest families, is the start to a series of mysterious murders of one heir after the other. Sir John asks inspector Wesby to cooperate with him as Wesby himself is investigating the family background of the Curtain family around Lady Ashton and a distant relative, the young painter Margie Fielding. All of the murders point to the return of the "Hexer" Arthur Milton but Milton is completely innocent. Together with inspector Wesby, he tries to solve the multiple murder case. Prequel "Der Hexer" (1964), directed by Alfred Vohrer.