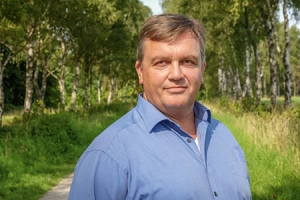 Hans-Peter Wilhelm Kerkeling, born December 9, 1964, in Recklinghausen, started his first attempt at a TV career already in 1977 when he applied for a part in the Loriot sketch "Weihnachten bei Hoppenstedts", to no avail though. During the end of his time at high school he formed a band called "Gesundfutter" together with several schoolmates and put out a record under the title "Hawaii".

One year later, Kerkeling already won the "Scharfbeil" award for young cabaret artists. He subsequently worked for several TV stations (WDR, BR) before he made his final breakthrough in 1984 with the TV comedy shows "Känguru" and "Kerkelings Kinderstunde" as well as with numerous guest appearances in the TV show "Extratour". During this time, Kerkeling established his talent to slip into different roles, for instance, into the role of the impertinent infant "Hannilein".

From 1989 to 1991, Kerkeling celebrated another huge success on TV with the comedy show "Total Normal", a show critical of the media. It won the Grimme award and Bavarian TV award, among other awards. As a quick-change artist, Kerkeling again caused a stir with the sketches and skits of the show, most notably, when he dressed as Queen Beatrix of the Netherlands in 1991 and managed to arrive at Berlin's Bellevue Palace shortly before the actual Queen was scheduled to drive up. He performed another spectacular charade as a Polish opera singer who irritated an arty audience with a nonsense performance that memorably featured his sudden and loud "Hurz!" exclamations.

Two years and the less successful RTL TV show "Cheese" later, Kerkeling's debut film "Kein Pardon" premiered on the movie screen. The satire film, starring Heinz Schenk as a TV host who is replaced by his biggest fan (played by Kerkeling), turned out to be a considerable box office hit.

During the following years, Kerkeling did not match this success with his next TV projects, including the ARD TV show "Warmumsherz" that flopped or the less-than-stellar TV comedies "Club Las Piranjas" (1995), "Willi und die Windzors" ("Willi and the Windsors", 1996), and "Die Oma ist tot" (1997).

Yet, Kerkeling celebrated another success with his Sat.1 TV show "Darüber lacht die Welt" (1998 to 2002) that again saw Kerkeling perform in several different roles and costumes. Furthermore, Kerkeling repeatedly hosted the charity gala for the German AIDS foundation, the "70er Show" (2003), the shows "Großer Deutsch-Test" (2004) and "Großer Deutschlandtest" (2005), and the TV series "Hallo Taxi" (2008 to 2009) for RTL.

In 2004, Kerkeling finished his second film, the screaming comedy "Samba in Mettmann", that mainly received negative reviews but still turned out as a moderate success at the box office.

In 2006, Kerkeling published his book "Ich bin dann mal weg" about his pilgrimage of the Way of St. James in 2001. With more than two million sold copies, his travel journal became the most successful book of 2006. During that time, Kerkeling also landed a phenomenal success as a comedian: In his RTL TV show "Hape trifft" (2005 to 2006), he established the character of the roving reporter "Horst Schlämmer" who became Kerkeling's most important and most popular comedy character during the following years. He also appeared in this role in the TV movie "Ein Mann, ein Fjord!" (2009) based on Kerkeling's audio book by the same name.

Schlämmer is also the main protagonist in Kerkeling's third feature film on the movie screen, "Horst Schlämmer – Isch kandidiere!" (2009). The satirical pseudo-documentary film, directed by Kerkeling's partner Angelo Colagrossi, portrays Schlämmer's attempt to establish himself with potential voters as the chancellor candidate of his own party.

After another success with the book "Der Junge muss an die frische Luft" about his childhood, the adaptation of "Ich bin dann mal weg" ("I'm Off Then: Losing and Finding Myself on the Camino de Santiago") opened in cinemas in December 2015. Directed by Julia von Heinz, the film starred Devid Striesow as Hape Kerkeling. With almost two million visitors, the film is a great box office success.

At the Bayerischer Fernsehpreis (Bavarian Television Prize) 2018 Kerkeling receives the honorary prize of the Bavarian Prime Minister. At the same time, Caroline Link shot his autobiography "Der Junge muss an die frische Luft" ("All About Me"); the theatrical release followed in December 2018.