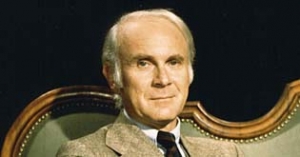 Bernhard-Victor Christoph Carl von Bülow was born November 12, 1923, in Brandenburg an der Havel as the son of Johann-Albrecht von Bülow, an officer in the Prussian army, and his wife Charlotte, born von Roeder. From 1927 on, "Vicco" and his younger brother Johann-Albrecht grew up at their widowed grandmother and great-grandmother Bülow in Berlin. His mother died two years later. In 1933, the brothers moved in with their father who lived with Annemarie Ehrhorn in second marriage since 1932 in Berlin-Zehlendorf. There, Vicco attended Humanistisches Gymnasium from 1934 to 1938. He then went to Eberhard-Ludwigs-Gymnasium in Stuttgart where he indulged in his passion for opera as an extra.

In 1940, Bülow made his first experience in the film business as an extra in Herbert Maisch's biopic "Friedrich Schiller. Der Triumph eines Genies". After a shortened final school exam, he served in the military from 1941 to 1945 with the motorized infantry and rose to the rank of lieutenant. After the war, Bülow worked as a woodcutter near Markoldendorf in the Solling mountains and caught up on his final school exam in Northeim. From 1947 to 1949, he attended drawing classes at Hamburg's Landeskunstschule where his teachers were Willem Grimm and Alfred Mahlau.

After six semesters, Bülow started to work as a freelance cartoonist under the stage name "Loriot" (French for oriole, the family's heraldic animal). From 1950 on, he drew cartoons for several magazines, among them Stern and Quick. His pug nosed characters aroused the protest of several readers who conceived them as "disgusting and degrading". Thus, some of his cartoon series like "Auf den Hund gekommen" (Stern, 1953) were shelved after a short period of time.

"During the 1950s, the middle classes and the church had voiced strong protests. There was, for instance, this young Catholic vicar who was boiling with indignation about this representation of humans that he thought were below animals." (Loriot in an interview with Gernhardt, Stern, November 4, 1993). In contrast, his series "Reinhold das Nashorn" was published for seventeen years (1953 to 1970) in children's supplement "Sternchen".

From 1954 on to this day, Loriot's books with cartoons and satirical prose are published by Diogenes Verlag in Zurich. His books cultivate the high-brow tone of conduct guidebooks and are supposed to serve animal and success lovers and philanthropists as "contemporary aides in difficult situations." Loriot's cartoons also graced commercials, for instance, for cameras and for the Scharlachberg brandy. In late 1957, he moved from Hamburg to Gauting near Munich, and in 1963, he moved into a villa in Ammerland at Lake Starnberg.

In 1957, Loriot made his movie debut in Frank Wysbar's submarine film "Haie und kleine Fische" ("Sharks and Little Fish") and started a short career as an actor for director Bernhard Wicki in 1959 as sergeant major Queiser in "Die Brücke" ("The Bridge") and as German officer in Wicki's episodes to the invasion drama "The Longest Day". In 1960, he broke with the soldierly role cliché that went to back to his family's history in Wicki's "Das Wunder des Malachias" ("Miracle of Malachias"), a satire about the economic miracle in West Germany.

On a suggestion by TV editor Dieter Ertel, Loriot presented international animation films in the ARD evening program from February 5, 1967, on. During the show, he always sat on a red Gründerzeit-style couch. The TV series was called "Cartoon" and was produced about four times a year by Süddeutscher Rundfunk Stuttgart until 1970. Because of the lack of interesting animation films, Loriot made more and more films on his own. After 13 shows, Tim Moore from Great Britain became Loriot's assistant instead of Peter Kleinknecht. Together, Moore and Loriot – with the support of department head Ertel – developed sketches with Loriot in the leading role. He then ended the TV series after the 21nd episode on December 25, 1972.

"Loriot's material stems from the everyday life of average German consumers, scenes that happen in restaurant, in front of the TV set, and again and again on his favourite piece of furniture – the couch. He does not moralize and he does not convey the impression that he is superior to the counterparts of his sketches and parodies. As a comedian, he is offender and victim at the same time." (Martenstein, 1988). Loriot made famous parodies of TV formats like interviews, discussions, or commercials, and of TV personalities such as Professor Grizmek, Werner Höfer, Gerhard Löwenthal, or Peter Merseburger. In 1974, Loriot became author, director, and leading actor of the Südfunk TV series "Telecabinett".

In 1971, he invented the cartoon dog "Wum" as an animated mentor for "Aktion Sorgenkind". Wum's appearances in the ZDF game show "Der große Preis" together with the cartoon elephant "Wendelin" became legendary. Loriot capitalized on his popularity and on his signature pug nose on playing cards, posters, masks, bookends, action figures, art prints, and a series of book publications with compilations of his drawings and prose texts.

As director, author, and actor, he premiered with "Loriot I" in spring 1976 on Radio Bremen where Dieter Ertel had become program director. For the new series, Evelyn Hamann sat with him on the (now green) couch and accompanied him as an enormously versatile film partner. Again and again, Loriot parodied middle class behavior and social norms. In 1980, he also made short political satires for the TV magazine "Report".

From the mid-1970s, Loriot more and more turned to music. He wrote texts for the recording and later also for concert presentations of the children's classics "The Carnival of the Animals" by Camille Saint-Saens and of "Peter and the Wolf" by Sergei Prokofiev. On October 9, 1979, he "conducted" Berlin’s Philharmonic Orchestra to play Beethoven's "Coriolan Overture" at the Federal Chancellor's party. He also delivered a witty speech at the orchestra's 100th anniversary in May 1982.

Furthermore, Loriot was the director, set and costume designer for several opera productions, including Friedrich von Flotow's "Martha" at Staatsoper Stuttgart that premiered on January 24, 1986, or Weber's "Der Freischütz" at Ludwigsburger Schloßfestspiele that premiered on August 17, 1988.

During the 1980s, Loriot – who had published his first anthology in East Germany in 1977 with Eulenspiegel-Verlag – more and more became an all-German star: In 1985, he opened a small exhibition of his drawings in the Dom-Museum of his native city Brandenburg, and in 1987, TiP (Theater im Palast der Republik) staged a reading performance and an exhibition.

Like other TV stars, Loriot used his TV popularity for guest performances and forays to the movie screen, for instance, in 1981 in a small double role in "Wer spinnt denn da, Herr Doktor?" that was directed by Loriot's longtime TV assistant Stefan Lukschy and Christian Rateuke, and in a cameo appearance as a stair climbing Thomas Mann in Bernhard Sinkel's multi-part TV movie "Bekenntnisse des Hochstaplers Felix Krull".

In 1987/88, Loriot finished the feature-length satire film "Ödipussi" as screenplay writer, director, and leading actor for Horst Wendlandt's Rialto Film. The film had a budget of 7.5 million Deutsche Mark and became a box office hit that garnered numerous awards. The comedy that was filmed by Xaver Schwarzenberger tells the story of an uptight psychologist (Evelyn Hamann) who tries to free an ageing mother's boy from the familiar complex. The film premiered on September 3, 1988 simultaneously in West and East Berlin cinemas.

Loriot's second film for the movie screen, "Pappa ante portas", was filmed in summer and fall 1990 at DEFA-Studio Potsdam-Babelsberg and at original locations in (then still) East Germay, for instance, at the famous pier in Ahlbeck on the Usedom island. In the leading role of an unexpectedly fired manager (plus in numerous episode roles), Loriot again brought middle-class insanity to the boil. Out of goodwill, he wants to help his wife (Evelyn Hamann) in the household but soon turns everything into chaos, thus presenting a challenge to their longtime marriage. "The film is based on the insanity of everyday life that everybody knows of. When I show how a head clerk orders 500.000 sheets of writing paper and rubbers by the ton because it is cheaper that way, then I demonstrate with this character the excesses of today's management that tries to get the utmost out of virtually everything. This is insanity but this insanity is universally accepted. Everybody knows that exhaust fumes contaminate the environment but when it seems economically favorable, more and more cars are being built. It is said that mankind only prospers when sales figures are increasing. That is called progress. But that is not going to work permanently. Someday, this will inevitably lead to a collapse." (Loriot in an interview with André Müller, Die Zeit, February 21, 1992).

On July 2, 2001, Loriot was appointed honorary doctor of the department of linguistics and literary studies of Bergische Universität Wuppertal for his "contribution to a sophisticated media culture, his successful efforts to mediate visual arts, music, and literature with humour and irony to a modern audience, for his remarkable versatility, and for his socio-critical sharp-sightedness". In the previous year, the Wuppertal University had already dedicated a monograph on the works of Stefan Neumann to Loriot.

In 1951, Vicco von Bülow married the fashion illustrator Rose-Marie "Romi" Schumbom in Nienstedten. The couple has two daughters, Bettina (born 1954) and Susanne (born 1958). On August 22, 2011 Vicco von Bülow passed away at the age of 87 at his home in Ammerland at the Starnberger See.