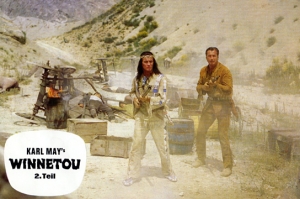 When his father dies, Winnetou becomes the new chief of the Apache Indians. He wants to restore peace between the Indians and the white men. After saving three officers from execution by the Assiniboine Indians, he manages to effect negotiations between the soldiers and the Indians. But the provocations of a Colonel cast doubts on the Indians′ side. Thus, to prove his peaceful intentions to the chiefs, Lieutenant Merril wants to marry the Indian girl Ribana. But Winnetou is in love with Ribana, too.

At the same time, Winnetou′s long-time friend Old Shatterhand is fighting against Forrester, a bandit who together with his vassal David Luke searches the land of the Indians for resources and tries to play the tribes against each other. Winnetou and Old Shatterhand know that there will not be peace as long as people like Forrester are making trouble.