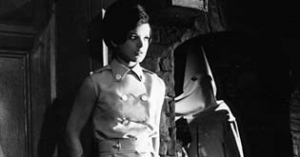 The Monk with the Whip

Another screen adaptation of Edgar Wallace's crime novel "The Terror" ( which was also the inspiration for the Rialto release "Der unheimlich Mönch" - "The Sinister Monk" - two years earlier): A girl who attends Mrs. Foster's boarding school is murdered with a new scentless gas which kills within seconds. During their investigation at the school, Inspector Higgins and Sir John encounter a number of suspects: several of the teachers, the gardener, a writer in residence – all of them could either be the murderer or turn out to be the next victim. Especially young Ann seems to be in danger, for a mysterious, red-hooded monk who kills his victims with a leaden ball attached to his whip appears to be after her.