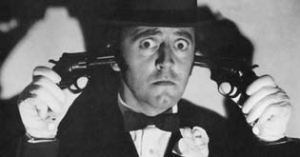 When the attorney′s secretary Gwenda Milton is murdered, the inspectors of Scotland Yard are facing a delicate job as the murder victim was the sister of Arthur Milton, better known as "The Wizard". Milton had been prosecuted for vigilante justice, thus had to emigrate to Australia several years ago. But Sir John and inspector Higgins are convinced that the cunning "Wizard" will come back to England to catch his sister′s murderer all by himself. Thus, a race against time begins.