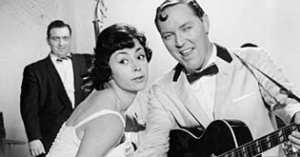 Here I Am, Here I Stay

Caterine, the singer and owner of a Parisian night bar, wants to marry her friend Pierre. At the registrar’s office, she learns that she is allegedly already married: to Baron Hubert von Löwenherz, the lord of a manor. A fraudulent employee had stolen Caterine’s documents and had married the Baron under Caterine’s name before she disappeared with the family jewels. Hubert who has to feign a happy married life to his rich uncle persuades Caterine to temporarily play his wife. And indeed, they finally take to each other while Pierre takes heart with the manor’s cook. The popular music film not only stars Caterina Valente but also includes a guest performance by Bill Haley and his Comets.