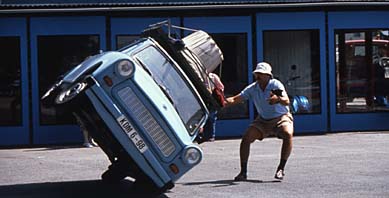 The novelist Christoph Hein once said that he is not interested in any great, true, historically fair and philosophically grounded "Wende novels"; furthermore, he would prefer a "Wende coat" ("turn around" coat) for practical reasons. Equally, one has been waiting in vain since 1990 for the definitive "Wende film" to appear in German cinema. One that condenses the history, the rise and fall of the half country GDR, the failed attempt to bring to life an utopia, into a riveting two hour film experience. To be fair to the forty years between 1949 and 1989 would mean to take into account the hopes and high-flung dreams as well as the historical antecedents and interludes, global dependencies, love, hate and rage of the period. But this seems to be too much to be captured in one single film, so that we will probably never really see the unique, all encompassing "Wende film"... 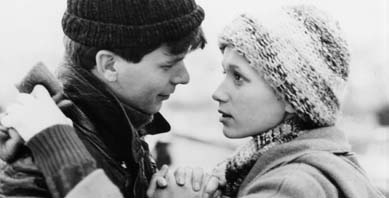 Instead, anyone who wants to experience the GDR and its after effects once again has to rely on all those many smaller filmic building blocks, which have dealt with this subject. Immediately after the peaceful revolution of 1989, a number of DEFA film directors harshly judged their former state: Films like Heiner Carow's "Verfehlung" (1991), Frank Beyer's "Der Verdacht" (1991), Herwig Kipping's "Das Land hinter dem Regenbogen" (1991) or Andreas Höntsch's "Die Vergebung" ("Forgiveness", 1995) pondered over the suspicions, violations and crimes, coalescing the attempt at Socialism made in Eastern Germany into an eccentric panopticon. Among the most important films which received very little public attention in the turmoil following the Wende are Egon Günther's drama of denial "Stein" (1991), Ulrich Weiß's parable "Miraculi" (1991) as well as Helmut Dziuba's film "Jana und Jan" (1992), in which GDR inhabitants suddenly find themselves in a No Man's Land or even Nirvana with no orientation. In the West, the GDR was taken on by a few filmmakers who were thought of as leftist. Interestingly enough, there is not really that much of a difference between the last, expressive films of Carow and Kipping for DEFA and the shrill, cry in the wind like films such as Helma Sanders-Brahm's "Apfelbäume" ("Apple Trees", 1992) or "Das Versprechen" ("The Promise", 1994) by Margarethe von Trotta. Throughout these works there are shady functionaries, Stasi-involved accomplices and defiant "small people" who have gone through the hell of this particular form of socialism, suffering grave injuries along the way. In this sense, East German and West German artists alike bid farewell to their own pasts, absolving themselves of their own political involvement and offering a sort of apology for their credulity. This radically critical view of the attempt at socialism made in GDR, which is also to be found in Volker Schlöndorff's and Wolfgang Kohlhaase's film "Die Stille nach dem Schuß" ("The Legends of Rita", 2000), can equally be discovered in the works of various young filmmakers like in Connie Walther's East-West teenage drama "Wie Feuer und Flamme" ("Never Mind the Wall", 2001).

Towards a New German Present 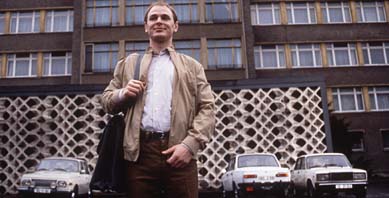 This image did not change until the second half of the 1990s. German cinema as well as other forms of media then approached the bygone GDR with a more gentle view, showing first signs of transfiguration. This view presumably coincided with the increasingly harsh reality that East Germans in the reunited country now had to face. This harshness was reflected throughout the cinema. Whereas the comedy "Go, Trabi, Go" (Peter Timm, 1990) and its sequel "Das war der wilde Osten" ("The Trip", 1992) by Wolfgang Büld and Reinhard Klooss still display the undisturbed fun of ex-GDR citizens who are finally allowed to travel the world, other films began to deal with existential fears soon to be found throughout the German East, like unemployment ("Herzsprung", "Heart Leap" by Helke Misselwitz, 1992; "Bis zum Horizont und weiter", "To the Horizon and Beyond" by Peter Kahane, 1998; "Wege in die Nacht", "Paths in the Night" by Andreas Kleinert, 1999), social degradation ("Verlorene Landschaft", "Lost Landscape" by Andreas Kleinert, 1992; "Burning Life" by Peter Welz, 1994; "Nachtgestalten", "Night Shapes" by Andreas Dresen, 1999; "Berlin is in Germany" by Hannes Stöhr, 2001) or an existence in increasing deprivation ("Engelchen", "Little Angel" by Helke Misselwitz, 1996; "Lichter", "Distant Lights" by Hans-Christian Schmid, 2003; "Farland" by Michael Klier, 2004). Alongside this concentration on the tragic side of the new German present, there suddenly emerged cheerfully awakened memories of the GDR, a phenomenon that is especially well conveyed through Leander Haußmann's film "Sonnenallee" ("Sun Alley", 1999), in which the leading actor, like Heinz Rühmann in "Die Feuerzangenbowle" (1944), thinks back to youthful pranks and makes considerable fun of silly teachers, police officers and other "leading comrades". Yet, the overwhelming success of "Sun Alley" (which was successful in both Eastern and Western Germany!) turned out to be a disadvantage for Sebastian Peterson's "Helden wie wir" ("Heroes Like Us", 1999), a film that was less nostalgic and tended more to the grotesque and the absurd, but failed to attract a wider audience. Here, a naive opportunist and Stasi subordinate succeeds in presenting himself as the inventor of the fall of the Berlin Wall. Swimming along with the tide of GDR nostalgia was "Kleinruppin Forever" by Carsten Fiebeler (2004), a film that despite having its "historical advisor" identified in the credits, is an embarrassing amalgam of mistakes and stereotypes.

Reflection on the relationship of East Germans and West Germans? 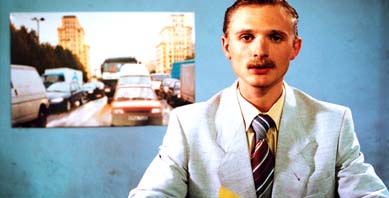 In 2003, Wolfgang Becker's tragicomical film "Good bye, Lenin!" was highly rewarded as a film about the GDR and the "Wende". The basic but brilliant idea of this "X-Filme" production is that a loyal GDR citizen, who falls into a coma before the "Wende", reawakens thereafter, with her son and some of his friends now trying to make her believe that the GDR still exists. Then the film shows how reality pierces through this facade and how the characters cope with the new situation. Great material! Unfortunately, it was unnecessarily damaged, when it is revealed that the heroine herself seriously thought about fleeing the GDR, after her husband had fled. With this volte-face Becker reduces his character, degrading her tragic dimensions. Thus, finally, "Good bye, Lenin!" fell short of becoming the great "Wendefilm", which it could have been. New films on the history of the GDR and its effects until the present day are being made in early 2005. Leander Haußmann and the author of "Sun Alley", Thomas Brussig, are shooting the military grotesque "NVA". Florian Henckel von Donnersmarck is shooting "Das Leben der Anderen", a film about the Stasi infiltrated cultural scene of East Berlin in the 1980s. Based on a screenplay written by Michael Klier, Dominik Graf's "Der Rote Kakadu" deals with the subject of young jazz fans who were persecuted and subjugated under the Ulbricht-Regime. But one perspective on the GDR and the consequences of unification that is still missing, is the one of former DEFA directors. Egon Günther, Rainer Simon, Roland Gräf, Lothar Warneke, Evelyn Schmidt, Jörg Foth and Herwig Kipping have all been unable to realize feature films for quite a while. Is German cinema to be accused of silencing these voices, and thereby missing an opportunity to reflect on the relationship of East Germans and West Germans?