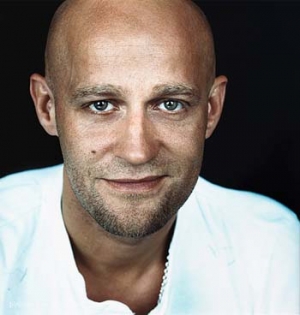 Jürgen Vogel was born on April 29, 1968, in Hamburg and already started acting as a teenager, for example in Volker Maria Arend's drama "Kinder aus Stein". After finishing secondary school, Vogel enrolled for actor's training at Munich's Schauspielschule but left already after the first day of training. Then, Vogel went to Berlin where he played theatre on an irregular basis and worked in several low-paid jobs. In 1988, he enjoyed his first success with Egon Günther's film "Rosamunde". His performance as a mentally labile kidnapper won him the award as best young actor at the 1990 Bayerischer Filmpreis.

Vogel made his break-through with the subtle portrait of a likeable hedonist in Sönke Wortmann's "Kleine Haie" ("Acting It Out") which won him another Bayerischer Filmpreis. Since then, Vogel maintained his high profile in the German movie and TV scene.

Vogel played leading parts in Dani Levy's "Stille Nacht" ("Silent Night") and Matthias Glasner's "Sexy Sadie", which was co-produced by Vogel, and inspired moviegoers and critics alike with his performance as daydreamer Jan Nebel who is unhappily in love in the X-Filme production "Das Leben ist eine Baustelle" ("Life Is All You Get") by Wolfgang Becker. Vogel won the Filmband in Gold at the 1997 Deutscher Filmpreis for this performance. Several other main roles in TV and cinema followed. In 2001 he played one of the leading parts in Doris Dörrie's tragic comedy "Nackt" ("Naked") and, in 2005, made his debut as a singer in "Keine Lieder über Liebe" ("No Songs of Love").

Vogel attracted great attention with his unsparing portrait of a rapist in "Der freie Wille" ("The Free Will"), directed by Matthias Glasner, co-produced and co-written by Vogel. Vogel was awarded the Silver Bear for his overall contribution at the 2006 Berlinale, while the film received a very controversial reception. For his role as a cancer patient in "Emmas Glück" alongside Jördis Triebel, Jürgen Vogel received the Bavarian Film Award for Best Leading Actor in 2007.

The following years, Jürgen Vogel remained one of the most busy TV and movie actors in Germany. After completing a total of seven film and television productions in 2006, he continued in 2007 with appearances in "Alte Freunde", "Duell in der Nacht", "Die Schatzinsel" and the crime series "KDD – Kriminaldauerdienst". Apart from that, he also found time for a cameo in Til Schweiger's hit comedy "KeinOhrHasen" ("Rabbit Without Ears").

After his leading role in the youth drama "Die Welle" ("The Wave", 2008), for which he was nominated for an European Film Award, Vogel again proved his versatility in 2009: He appeared in Matthias Glasner's controversial drama "This is Love" and the comedy romp "Männersache", and also played a Viking in Michael Herbig's adaptation of "Wickie und die starken Männer" ("Vicky the Viking"). On TV, Vogel joined the cast of Bernd Schadewald's acclaimed drama "12 Winter", and since 2009, he is a regular on the improvisational comedy program "Schillerstraße".

In the spring of 2010, no less than two feature films starring Jürgen Vogel were released: He plays an East-German police officer in the comedy "Boxhagener Platz", and in the drama " Schwerkraft" ("Gravity"), he portrays the shady friend of a struggling bank accountant.

After supporting roles in Philipp Leinemann's drama "Transit" and Lars Kraume's "Die kommenden Tage" ("The Days to Come"), which is a grim vision of the future with a top-class cast, Jürgen Vogel for change performs again in a comedy: In Leander Haussmann's "Hotel Lux", with Michael Herbig as co-star, he plays a stand-up comedian, who flees from the Nazis and escapes to Moscow, where he becomes involved in a grotesque intrigue.

He then appeared in a far more serious role in "Gnade", which premiered in the competition of the 2012 Berlin IFF and marked his ninth collaboration with director Matthias Glasner. In the psychological drama about guilt and atonement, Vogel plays a man who relocated to Norway with his family and is faced with an existential crisis when his wife runs over a little child and commits a hit-and-run offense. He delivered another strong performance as an alleged cop killer on the run in Matti Geschonneck's made-for-TV thriller "Tod einer Polizistin". Following his turn as the aristocratic army officer Siegfried von Tennen in Uli Edel's two-part TV feature film "Das Adlon. Eine Familiensaga" (2012), Vogel returned to the big screen: In Oskar Roehler's family epic "Quellen des Lebens" (2013), Vogel plays an army veteran who makes a fortune in Germany's post-war boom. He played the small role of the teenage main character's father in Katja von Garnier's "Ostwind" (2013). That same year he appeared in guest roles in the German crime series "Rosa Roth" and "Ein starkes Team".

In 2014, three films with Jürgen Vogel were released in German cinemas: in Maximilian Erlenwein's psycho thriller "Stereo" Vogel starred as an ex-criminal whose past catches up with him in his newfound bourgeois life. In Sönke Wortmann's adaptation of the bestseller "Schoßgebete" ("Wrecked") he got to display his talent for comical roles playing the husband of a sexually adventurous wife. In Max Zübert's "Hin und weg" ("Tour de Force") he plays one of the friends of a terminally ill man who set out for a last bike tour.

Back on TV, he starred in Tim Trageser's "Der Äthiopier" (2015) in the role of a tight-lipped nerd and notorious criminal, whose muscles and many tattoos hide a scarred soul. He played the main character, a police inspector, in the TV mini series "Blochin: Die Lebenden und die Toten" (2015) and made appearances as an EDP specialist in the thriller "Vertraue mir" and as a scoundrel in "Winnetou – Eine neue Welt" (2016). In 2017, Jürgen Vogel was a cast member of the children's film "Hexe Lilli rettet Weihnachten" ("Lilly the Witch Saves Christmas") and played the lead role as "Ötzi", the Tyrolean Iceman, in "Der Mann aus dem Eis" ("Iceman").

For television, Vogel played a leading role as a German Europol investigator in the second season of the crime series "The Team" (BE/DK/DE/AT/CH 2018). In the family series "Das Wichtigste im Leben" (2019) he played a father alongside Bettina Lamprecht. He also reprised the title role of the investigator with a dark past for "Blochin: Das letzte Kapitel" (2019).

On the big screen Vogel could be seen alongside Jan Josef Liefers and Armin Rohde as an ex-teenage rock musician in the Frank Goosen film adaptation "So viel Zeit" (2018), as a cancer patient in the youth film "Club der roten Bänder - Wie alles begann" ("The Red Band Society", 2019) and as an odd theatre director in danger in the children's film "Die drei !!!" ("The Three Exclamation Marks", 2019). He had smaller parts in the coming of age and coming out story "Futur Drei" ("No Hard Feelings", 2019) and the self-discovery drama "Stillstehen" ("Stay Still", DE/IT 2019).

Together with Heiner Lauterbach and Hilmi Sözer, Vogel had a leading role in the comedy "Es ist zu deinem Besten" (2020), about three fathers who want to get rid of their future sons-in-law at all costs.

In the relationship comedy "Es ist nur eine Phase, Hase" (2021), he was the best friend of the male lead character.

In 2021, Vogel took on lead roles in two series at the same time: in the crime series "Jenseits der Spree" as a single father and chief detective; in the award-winning crime comedy series "KBV - Keine besonderen Vorkommnisse" together with Serkan Kaya as a policeman on a surveillance mission.