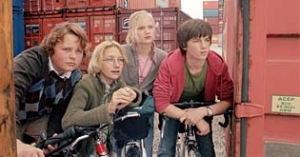 At first, the four friends Tim, Karl, Klößchen, and Gaby (in short: TKKG) do not suspect foul play when "Jugend forscht" winner Kevin behaves weird during the presentation of his "Mind Machine". They rather think that Kevin′s nervous behaviour and the unexpected ending of his speech is due to his problems with his girlfriend Nadine. But when Nadine, like three other children before her, disappears without a trace, the hobby detectives know that they have to support the local police in their investigation because the commissar in charge has absolutely no clue. What is genial Kevin up to? And what has suspiciously acting teacher Manek to do with the case? In the run-down house of Kevin′s parents TKKG find out more about the secret of Kevin′s enigmatic "Mind Machine".