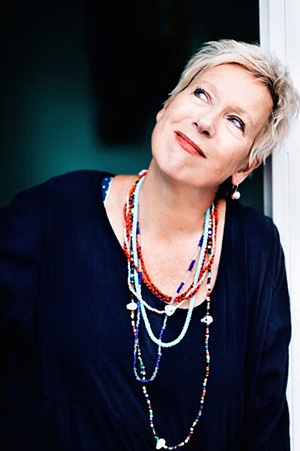 Doris Dörrie was born May 26, 1955, in Hanover as the daughter of a physician. In 1973, she received her university-entrance diploma and moved to the USA for two years in order to study acting and film at the University of the Pacific, Stockton/CA. Afterwards, she attended the New York School of Social Research and worked as a waitress and a film projectionist at the Goethe House New York. In 1975, she returned to Germany and enrolled at the Academy for Television and Film in Munich.

In collaboration with Wolfgang Bernd, she directed "Ob's stürmt oder schneit" in 1976. The documentary portrays Maria Stadler, a cinema owner from a small Bavarian village. In 1978, she shot her graduation film "Der erste Walzer", an unsentimental movie about two teenagers sharing their first experiences with work and life. With these early works, Dörrie was already able to attract a large audience.

Subsequently, she worked as a freelancer for several TV stations. Her credits include the children's film "Paula aus Portugal" (ZDF) and documentaries for the Bavarian broadcasting company BR, e.g. a documentary about a young shepherdess ("Von Romantik keine Spur") and a film about an 85-year-old former maidservant who still actively participates in life ("Katharina Eiselt"). For the Westdeutscher Rundfunk (WDR) she directed the television play "Dazwischen", a love story about two teenagers.

In 1983, she shot "Mitten ins Herz" ("Straight Through the Heart"), which was shown at the Venice Film Festival. The film tells the story of Anna Blume (Beate Jensen), a 22-year-old woman who is fed up with her job at a supermarket when suddenly the dentist Arnim Thal (Sepp Bierbichler) shows up and offers to pay for her acquaintance. All he expects of her is to live at his house – no love attachment. Nevertheless, Anna falls in love with him, fakes a pregnancy, kidnaps a Turkish child and has to watch helplessly how the dentists's affection turns more and more towards this child. Anna Blume shoots the man and flees. "A parable-like story about two generations, two sexes, both caught up in an all-too-common form of egomania." (W. Schütte, Frankfurter Rundschau, 9/2/1983).

In 1984, Dörrie directed "Im Innern des Wals" ("In the Belly of the Whale"). The movie was based on a screenplay she wrote back in 1980. The plot "can be described with the headline: Police officer wacks out after daughter is kidnapped" (Dörrie). The director and her two leading actors, Jana Marangosoff und Eisi Gulp, manage to depict both a road trip "through a rainy North German summer and the difficult, touching, gently humorous relationship between Karla and the singer Rick who is ‘coincidentally‘ heading in the same direction as Karla." (A. Frederiksen, Die Zeit, 4/26/1985).

In 1985, Dörrie achieved a great popular success with "Männer" ("Men"), both in Germany and abroad. The comedy revolves around two antithetic men played by Heiner Lauterbach and Uwe Ochsenknecht. While Lauterbach portrays the manager Julius who gives up his career for a room in a shared apartment, Ochsenknecht stars as the dropout Stefan who suddenly begins to take an interest in starting a career. The German magazine "Der Spiegel" assumed that the movie "grabbed hold of the zeitgeist – just like May Spils' freewheeling comedy "Zur Sache Schätzchen" ("Go for it, Baby") did in 1968. The critics were divided: While some of them praised the easy-going direction and Dörrie's touch for slapstick, others missed satirical keenness.

The 1986 tragicomedy "Paradies" ("Paradise") was largely considered an attempt to avoid making an indirect sequel to "Männer". This time it is a man, the zoology professor Viktor (Heiner Lauterbach), who stands between his wife (Sunnyi Melles) and her former school friend Lotte (Katharina Thalbach). When the wife tries to make their married life a bit more interesting, she raises complications that will profoundly change the lives of all three of them. While "Männer" was defined by its sense of joviality, "Paradies" is more surreal and tragic. In 1987, Bernd Eichinger - always on the lookout for young talents with public appeal - signed Dörrie for the international production of "Ich und Er" ("Me and Him"), based on the novel by Alberto Moravia. The movie was shot in New York and focused on the architect Bert Uttanzi (Griffin Dunne) and his experiences with women.

In 1988, Dörrie directed the comedy "Geld" ("Money"), in which two couples – the narrow-minded Müllers and their noveau-riche neighbors – find understanding for each other after a bank robbery with hostage-taking. After her success with "Männer", Dörrie apparently hit rock bottom with this movie: It flopped at the box office and received very negative reviews. In 1989, Dörrie established the Cobra film production company alongside Gerd Huber and Renate Seefeld. Constant staff members included the cinematographer Helge Weindler, whom Dörrie had married in 1988, the co-writer and assistant director Michael Juncker as well as the cutter Raimund Barthelmes.

In 1991, Dörrie directed "Happy Birthday, Türke" ("Happy Birthday!"). Based on the popular novel by Jakob Arjouni, the movie tells the story of Kemal Kayankaya, a private detective of Turkish origin who works in Frankfurt and gets caught in the crossfire between the drug mafia and the police. While investigating the whereabouts of a missing Turkish family man, Kayankaya exposes the connections between the criminal world and the authorities. Visually, the film is reminiscent of French crime movies from the 1980s, thus avoiding the pitfalls of German TV crime movie aesthetics. The dialogues, however, tend to be somewhat awkward.

Since 1987, Doris Dörrie has been successfully publishing short stories that increasingly caught the attention of the critics. More and more, her vignette-like stories have become infused with the plots of her movies. Characters from her books are refined in her films and transformed back into literature. "All of her stories are connected by the sharp discrepancy between the limited gestures of normal everyday life and the human existence." (J. Jessen, Frankfurter Allgemeine Zeitung, 10/6/1987).

The movie "Keiner liebt mich" ("Nobody Loves Me", 1993) is based on characters from her short story collection "Für immer und ewig". The bizarre residents of a Cologne apartment building located between train tracks and wasteland include the single woman Fanny Fink (Maria Schrader), who is on the brink of her 31st birthday and plagued by the existential fear of being alone, the visionary Orfeo (Pierre Sanoussi-Bliss), whose sense of mission reaches both his neighbors and aliens, as well as the building's charming new caretaker Lothar Stricker, who turns out to be a womanizer.

In spring 1996, while Doris Dörrie was shooting "Bin ich schön?" ("Am I Beautiful?") in Spain, her husband and cameraman Helge Weindler died from meningitis on March 22. Hereupon, the production was cancelled and restarted in autumn 1997. In "Bin ich schön?", Dörrie managed to further enhance the complexity of her characters as well as the artful interlacing of the stories, which center on members of the young generation between Germany and Spain who must deal with life, hope, lies and truth. For this project, which was again produced by Eichinger's company Constantin, Dörrie assembled a large cast of popular German actors.

In her next two movies, Dörrie yet again adressed the conflicts of life. In "Erleuchtung garantiert" ("Enlightenment Guaranteed ") two very different brothers (played by Gustav-Peter Wöhler and Uwe Ochsenknecht) travel to a Zen monastery in Japan in order to cope with their midlife crisis. "Nackt" ("Naked") centers on interpersonal relationships: Three befriended couples meet for dinner and see their love and friendship put to the test. Featuring yet another cast of popular German actors (including Heike Makatsch, Benno Fürmann, Jürgen Vogel, and Alexandra Maria Lara), the film has the atmosphere of an intimate play.

After the comedy "Der Fischer und seine Frau" (2005), starring Alexandra Maria Lara and Christian Ulmen, Dörrie next project was a documentary: "How to Cook Your Life" portrayed Zen priest and chef Edward Brown, and premiered in the "Culinary Cinema" section of the 2007 IFF Berlin. The following year, Dörrie was again invited to the festival, this time joining in the official competition: "Kirschblüten - Hanami" tells the story of an aging man, who travels to Japan after the devastating death of his wife and in his mourning process finds the courage to start over. The melancholic tale got rave reviews and was celebrated in the international festival circuit. Lead actor Elmar Wepper was awarded the Bavarian Film Prize, the German Film Award as well as the Prize of German Film Critics.

In 2010, Dörrie returned to the Berlinale with "Die Friseuse", a comedy about an overweight hairdresser who competes with a snobbish salon owner. In 2012 her adaptation of a short story by Ferdinand von Schirach opened in cinemas: "Glück" ("Bliss") tells the story of an illegal prostitute in berlin who falls in love with a punk. 2014 saw the release oft two new films by Doris Dörrie: She adapted her own novel in the comedy "alles inklusive", and portrayed an all-female mariachi band from Mexico in the documentary "Dieses schöne Scheißleben".

In "Grüße aus Fukushima" ("Greetings from Fukushima", 2016) Dörrie again told a story set in Japan, this time in the catastrophically shaken Fukushima. The melancholic drama about the unusual friendship between a young German and an ageing geisha was awarded the CICAE Art Cinema Award and the Heiner Carow Prize of the DEFA Foundation at the Berlinale 2016. In the same year Dörrie was awarded the Hans-Vogt-Filmpreis at the Hofer Filmtage for her merits for sound film. In 2018 she was honoured at the Max Ophüls Film Festival with the Honorary Award for her merits for Young German-Language Film.