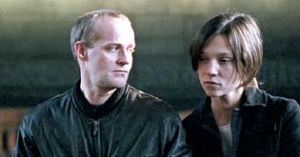 Theo, a rapist, is released after nine years in a psychiatric hospital’s prison ward. His fear of women and the unfulfilled desire this generates turns normal life into a kind of martyrdom. At the age of 27, Nettie finally manages to cut herself free from her father and a lifetime of mental abuse at his hands. Theo and Nettie meet. The moment they start loving each other marks the beginning of their journey to the limits of free will.

Matthias Glasner: "This film is about things we think of as monstrous or abnormal. We shot it in chronological order and, when I looked through the camera and saw what Theo does to this woman in the opening sequence, I had my doubts as to whether I would stay the course. But I wanted to make a tender film about the terror of loneliness. And so I filmed everything with the same amount of interest – regardless of what happened, and no matter if events were brutal or guardedly hopeful. 'Der freie Wille' is not a film about an issue such as, in this case, say, physical and mental violation. It's not a film that grapples with a difficult topic but rather a kind of 'trip', during which we accompany two people resolutely to the end. For better or for worse."