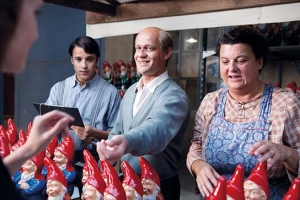 Germany 1949: Veteran soldier Erich feels like a stranger after his return to his homeland, which in the meantime has become a new Federal Republic. Through Erich and his children’s and grandchildren’s generations, we experience the milestones in the history of the Federal Republic of Germany: his wife has a lover, in order to promote the “economic miracle” a garden gnome factory is built, his son becomes a poet, but it’s his son’s wife who is far more talented, and his grandson, strengthened by the Group 47 and free love, is surprisingly capable of finding the only one, true love and becomes a cheerful and good person in a country of narcissists, petty bourgeoisie, and former Nazis. And even Erich is moved, despite his frustration, to acts of greatness.