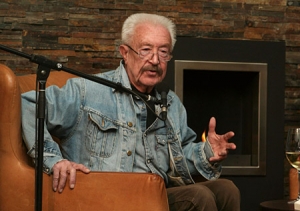 Egon Günther was born March 30, 1927, in Schneeberg (Erz Mountains) as the son of a workman. Following an apprenticeship as a locksmith, he worked as a draftsman at an engineering agency. From 1944 until 1945, he joined the war as a soldier and was able to escape from war captivity in the Netherlands. From 1948 until 1951, he studied education, German literature, and philosophy at the Karl Marx University in Leipzig, where his professors included Ernst Bloch. After giving up his job as a teacher, Günther became an editor at a publishing company in Halle/Saale. He published a collection of poems ("Die Zukunft sitzt am Tisch"; 1955), two novels ("Flandrisches Finale", 1955; "Der kretische Krieg", 1957), and one novella ("Dem Erdboden gleich", 1958), before starting to work as a dramatic advisor and screenplay writer at the DEFA Studio for Feature Films in Potsdam-Babelsberg.

However, Günther never gave up on literature. In 1971, he published a novel which recalled the case of Eichmann: "Rückkehr aus großer Entfernung" centers on a former concentration camp prisoner hunting down a war criminal. [The authentic Eichmann case had already been mentioned in his novel "Die schwarze Limousine" on which he based the screenplay for the film "Jetzt und in der Stunde meines Todes" ("Now and in the Hour of My Death").] His largely autobiographical novel "Einmal Karthago und zurück" (1974) is set in the film business of the GDR. It also looks back at the protagonist's past, i.e. that of the director Ernst Waldenburg. In "Reitschule" (1981), which tells the story of a handicapped girl, Günther yet again reflected on personal experiences. "You can tell from my books that they were written by someone who makes movies. Simultaneously, in my movies I try to adopt literary devices". (Günther, 1976).

In 1965, he made his debut as a director with "Lots Weib". His screenplays were often based on scenarios by Helga Schütz, his wife of that time. His second movie, "Wenn du groß bist, lieber Adam", was banned by the SED's Central Committee. In addition to directing movies which were set in the present ("Anlauf", "Der Dritte", "Die Schlüssel"), Günther also adopted several novels by Johannes R. Becher and Arnold Zweig, which reflected on the years surrounding the First World War. In the mid-70s, he started working on a series of movies revolving around Johann Wolfgang von Goethe ("Lotte in Weimar", based on the novel by Thomas Mann; "Die Leiden des jungen Werthers"; the documentary "Weimar, du Wunderbare"; the television play "Euch darf ich's wohl gestehen").

Following the international success of his movie "Der Dritte" ("The Third"), Günther experienced a backlash with "Die Schlüssel": It flopped at the box office and was not allowed to be screened outside the GDR after Polish protest. Subsequently, Günther turned to adapting literature for film, thus making a formal withdrawal as he pointed out while shooting "Leiden des jungen Werthers" ("The Sorrows of Young Werther"): "I would prefer to make a movie set in the presence. At this very moment, however, it seems to be sort of difficult for me to carry out this plan. Therefore, this interesting, historical subject matter was able to fully capture my attention." (Sonntag, No. 34, 1976).

In the summer of 1977, Günther resigned from the Association of Film and TV Personnel of the GDR and started to direct television productions in Western Europe ("Ursula", a co-production between Switzerland and the GDR; "Weimar, du Wunderbare", produced by the Saarland broadcasting corporation). Since the late 70s, Günther has solely worked in West Germany, e.g. on the seven-part TV series "Exil" (1979/1980), based on the novel by Lion Feuchtwanger. In 1983, he directed "Hanna von acht bis acht", based on a novel by Klaus Poche. This film was followed by "Morenga", a three-part TV production for the broadcasting institution WDR. "Morenga" was based on Uwe Timm's novel about the German colonies in Africa.

In 1987, the three-part series "Heimatmuseum", based on the bestselling novel by Siegfried Lenz, became a huge popular success. The big-screen movie "Rosamunde", depicting a kidnapping case from 1931, however, turned out to be failure. In 1990/1991, Günther shot "Stein", an impressively directed movie about an artist (Rolf Ludwig) who lives in isolation in the GDR. Based on a scenario by Helga Schütz, "Stein" was one of the last DEFA films. However, in the tumultuous times following the German reunification it failed to attract a larger audience. Subsequently, Günther turned towards literary matters again: "Lenz. Ich aber werde dunkel sein" is an essayistic feature film about the life of the German writer Jakob Michael Reinhold Lenz (1751-1792) and his relationship to Goethe, whose marital life with Christiane Vulpius formed the center of "Die Braut", Günther's contribution to the Goethe Year of 1999.

In 1999, Egon Günther received an honorary German Film Award for his life's work. Three years later, the DEFA-Stiftung awarded him a prize for his achievements in German cinema. Since 2014, a star on the "Boulevard der Stars" walk of fame is bearing his name. In 2016, Günther who lived in Groß Glienicke near Berlin with his wife was made an honorary citizen of his hometown Schneeberg.

On August 31, 2017, the filmmaker and writer Egon Günther died in Potsdam after a long-term illness.