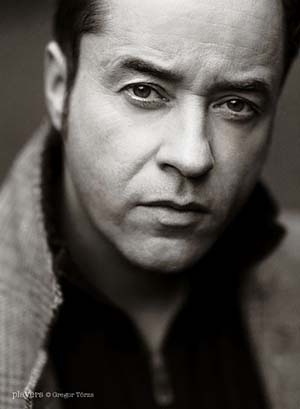 Jan Josef Liefers, born August 8, 1964 in Dresden, started out as a carpenter but then attended actor's training at Hochschule Ernst Busch in Berlin from 1983 to 1987. He performed at Deutsches Theater in Berlin until 1990 before he became a cast member at Hamburg's Thalia Theater. Liefers made his TV debut as Alexander von Humboldt in "Die Besteigung des Chimborazo" (1989). In 1997, Liefers starred in two enormously successful comedies, as a shy cancer patient in "Knockin' on Heaven's Door", and as a romancing society man in "Rossini".

After several other movies like the underrated horror thriller "Sieben Monde" ("Night Time") or the frivolous comedy "666 – Traue keinem mit dem du schläfst" ("666: In Bed with the Devil") flopped at the box office, Liefers made a successful return to television and starred in TV movies such as "Die Sturmflut" or "Der Untergang der Pamir". In 2004, Liefers won a Grimme award for his portrayal of a miner in "Das Wunder von Lengede". Since 2002, Liefers also appears regularly as Professor Boerne in the Münster branch of the "Tatort" crime film series. Liefers also directed several TV films: the romantic comedy "Jacks Baby" (1999) which won the Bavarian film award, and the comedy "Frauenversteher – Männer unter sich". In 2007, Liefers returned to the cinema and starred in two eagerly awaited films: the highly praised children's book adaptation "Max Minsky und ich" ("Max Minsky and Me") and the star-studded comedy "Bis zum Ellenbogen".

The following year, he played journalist Peter Homann in Uli Edel's "Baader Meinhof Komplex". He got rave reviews for his portrayal of legendary TV chef Clemens Wilmenrod in the TV production "Es liegt mir auf der Zunge" (2009). He delivered an award-winning performance as a Jewish bookseller in WWII Sweden in the drama "Simon", which was released in Germany in 2012. The same year, he appeared alongside Wotan Wilke Möhring and Jasmin Great in Marc Rothemund's comedy "Mann tut was Mann kann" ("Men Do What They Can"), playing a philandering husband who is eventually expulsed by his wife and sets up camp in his best friend's home.

Liefers continued to portray the extravagant Professor Boerne in the immensely successful "Tatort" series, a character highly popular with audiences and a true signature role for the actor. Liefers also got rave reviews for his performance in the TV adaptation of Uwe Tellkamp's novel "Der Turm" (2012), which won him the 2013 Grimme Award. The same year, he starred in Wolfgang Murnberger's "Die Spätzünder 2", and in 2014, he appeared opposite Henry Hübchen and Alina Levshin in "Der Mann ohne Schatten".

After a cameo in Til Schweiger's tragicomedy "Honig im Kopf" ("Head Full of Honey", 2014), Liefers reprised his role from the comedy "Mann tut was Mann kann" for the sequel "Da muss Mann durch" (2014). His next projects included "Mara und der Feuerbringer" ("Mara and The Firebringer", 2015) and the black comedy "Desaster" ("Disaster", 2015), which unites him on screen with his real-life wife Anna Loos.

In Carlo Rola's thriller "Die siebte Stunde" (2016, TV) Liefers featured as a lecturer at a private high school who uncovers the occult practices of a clique of students. Friedemann Fromm then cast him for the thriller "Mörderische Stille" (2016, TV) as a Wilhelmshaven detective investigating the case of a murdered ex-officer from the Netherlands.

At Hofer Filmtage, "Die Blumen von gestern" ("Bloom of Yesterday") by Chris Kraus premiered in October 2016. The tragicomedy sees him play the father of the stressed-out protagonist (Lars Eidinger). The movie will open in German theaters in January 2017.

Right before that, on Christmas 2016, the gangster comedy "Vier gegen die Bank", helmed by Wolfgang Petersen, will be released. Starring alongside Til Schweiger, Michael Herbig and Matthias Schweighöfer, Liefers plays a deceived investor who wants to get even with a bank director and tries get his money back.