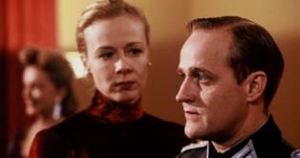 New York 2001. After her husband dies, Ruth seems to be acting very distraught, according to her daughter Hannah. When Hannah starts probing into the past, she finds out that her mother, whose Jewish parents were deported during World War II, was raised by an "Aryan" woman named Lena. Hannah travels to Berlin and finds the now almost 90-year-old Lena. The old woman tells Hannah her story: the story of the women of the Rosenstrasse.

Lena was married to a Jewish musician. One day when he didn't come home from work, she went out looking for him. After a bureaucratic odyssey, she is sent to the Rosenstrasse, where she finds other women also looking for their Jewish husbands who have been incarcerated there. It is in the Rosenstrasse that Lena meets little Ruth.

Upon the wives' diligent insistence, the men are released, but Ruth's mother is deported. Ruth stays with Lena until relatives in the United States send for her. After losing her own mother, Ruth cannot stand losing Lena too, and, in a furious rage, throws the ring that she once received from her mother at Lena's feet. When Hannah returns with this ring, Ruth is finally able to come to terms with her past.