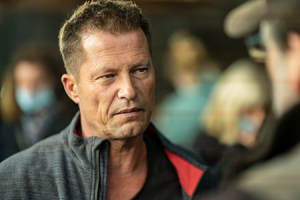 Til Schweiger was born December 12, 1963 in Freiburg. He began to study medicine in Cologne, but quit soon. After studying German and working as a waiter and discjockey he decided to become an actor. Three years of actor's training at the school of the theatre "Der Keller" in Cologne followed, then he first played in Bonn at "Contra-Kreis-Theater".

From 1991 on Schweiger played Jo Zenker in the TV-Series "Lindenstraße" – a role which made him popular despite its sporadic appearances. Then Schweiger was discovered by Bernd Eichinger who casted him for his action comedy "Manta, Manta", followed by his second role in a feature film: as amateur boxer Rudy in "Ebbies Bluff" (1993) he was awarded Max Ophüls Price for best young actor. From 1994 on he played the assistant to Hannelore Elsner in the TV crime series "Die Kommissarin".

The huge success of Sönke Wortmann's comedy "Der bewegte Mann" ("Maybe, maybe not", 1994) after the cartoon by Ralf König, in which Schweiger played the heterosexual Axel in homoerotic turbulences made him a real star and also a sex symbol. In the following years he played in Lars Becker's "Bunte Hunde" ("The Break", 1995) and Detlev Buck's "Männerpension" ("Jailbirds", 1996). In spring 1996 he founded the production company "Mr. Brown Entertainment" together with Thomas Zickler and André Hennicke. Their first feature film was the crime comedy "Knockin' on Heaven's Door" (1997) by newcomer director Thomas Jahn which turned out to be an enormous success.

In the following years Schweiger was also seen in international productions like "Bastard" with John Hurt and in a small role as a killer in "The Replacement Killers" by Antoine Fuqua. His debut as a director followed in 1998 with the comedy "Der Eisbär" ("The Polar Bear", 1998) about two killers in trouble – one of them played by Schweiger.

With the romantic comedy "KeinOhrHasen" ("Rabbit Without Ears", 2007) that again saw him as director, producer, author, and leading actor, Schweiger celebrated a huge box office success in 2007: The film about a cynical gossip reporter who falls in love with a sensitive kindergarten teacher (Nora Tschirner), attracted more than six million viewers to the movie theatres.

Again with himself and Nora Tschirner in the leading roles he directed the sequel to "Keinohrhasen" in 2009: "Zweiohrküken" ("Rabbit Without Ears 2"). In the same year he was part of the ensemble of "Männerherzen" ("Men in the City"), directed by Simon Verhoeven. His next work as director was the comedy "Kokowääh", once again with himself but also with his little daughter Emma Tiger in the leading roles.

The same year, he had a supporting role in the international co-production "Die drei Musketiere" ("The Three Musketeers"), starred in the sequel "Männerherzen... und die ganz ganz große Liebe" ("Men in the City 2") and appeared in a small part in the Hollywood production "Happy New Year". Joining a cast including Reese Witherspoon, Chris Pine und Tom Hardy, he played a contract killer in the action comedy "This Means War" (US, 2012), and in the thriller "The Courier" (US, 2012), he appeared as an FBI agent opposite Jeffrey Dean Morgan and Mickey Rourke.

In the late summer of 2012, Schweiger released his seventh feature film as director: "Schutzengel" ("Guardians") tells the story of a former soldier (Schweiger), who is assigned to protect a prime witness, who is played by Schweiger's daughter Luna. Immediately after the release of "Kokowääh 2", which again featured Schweiger as director, producer and male lead, he made his debut as police detective Nick Tschiller in the "Tatort" TV franchise: Directed by Christian Alvart, "Willkommen in Hamburg" was an unusually action-packed entry in the "Tatort" series and turned to be a ratings hit.

Next, Schweiger made the titular stuffed animals of his box office hits "Keinohrhasen" and "Zweiohrküken" the protagonists of an animated feature film which he co-directed with Maya Gräfin Rothkirch: "Keinohrhase und Zweiohrküken" was released in September 2013.

Following his next turn in the "Tatort" TV series and notable cameos in Peter Thorwarth's "Nicht mein Tag" ("Not My Day", 2014) and "Muppets Most Wanted" (US 2014), Schweiger directed (and co-starred in) the box office hit "Honig im Kopf" ("Head Full of Honey"), which won the audience award at the 2015 German Film Awards.

In 2016, he returned to his role as Hamburg police detective Nick Tschiller for two more "Tatort" entries on TV, and the plot of these films was eventually continued in the theatrical release "Tschiller Off Duty". In the summer of 2016, Schweiger guest-featured in the teenager film "Conni & Co." which he also co-produced and in which his daughter Emma Tiger played the lead. "Unsere Zeit ist jetzt" (2016), an idiosyncratic blend of comedy, romance and a showbiz portrait about and with rapper Cro, saw him in a similar constellation as the producer and in a supporting role.

Schweiger returned to play a lead in the crime comedy "Vier gegen die Bank" (2016) in which Schweiger, Matthias Schweighöfer, Jan Josef Liefers and Michael Herbig form a crew of amateur crooks who want to take revenge on a scheming bank director.

As an actor he was also seen in a small role in the action movie "Atomic Blonde" (US 2017) with Charlize Theron, as a sheriff in "Bullyparade: Der Film" ("Bullyparade – The Movie", 2017) and as a an investigator of the German Federal Criminal Police Office in the action comedy "Hot Dog" (2017). As co-producer he was involved in Volker Schlöndorff's "Rückkehr nach Montauk" ("Return to Montauk", 2017).

As the director of "Conni und Co 2 - Das Geheimnis des T-Rex" (2017) Schweiger could not continue the success of the first part, but with the comedy "Klassentreffen 1.0" ("Class Reunion", 2018) he once again succeeded in making a box-office hit. "Head Full of Honey" (2018), the English-language remake of "Honig im Kopf" ("Head Full of Honey"), was supposed to establish Schweiger as a director internationally. But despite the prominent cast with Nick Nolte and Matt Dillon in the leading roles, the film received unfavourable reviews by American and British critics and was also unsuccessful at the box office.

In 2019 the episode film "Berlin, I Love You" (DE/GB) was released, for which Schweiger had directed a segment. In the same year he also started his next feature-length film, "Die Hochzeit" (Theatrical release scheduled for 2020), a sequel to "Klassentreffen 1.0".

Portrait of Til Schweiger in "German Films Quaterly"