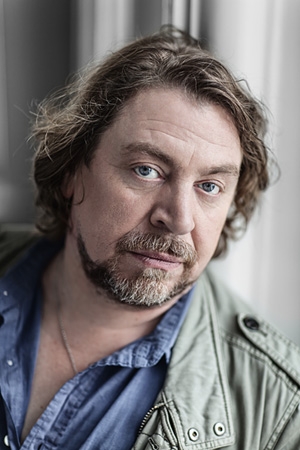 Armin Rohde, born April 4, 1955, in Gladbeck, graduated from training with the clown Pierre Byland and attended Folkwang-Schauspielschule in Essen from 1980 to 1984. He subsequently performed at Theater Bielefeld before he became a cast member of Schauspielhaus Bochum in 1987. Rohde stayed in Bochum until 1995 where he performed classic dramatic roles of Mack the Knife and Richard III, among others.

In 1984, Rohde made his debut as a movie actor in a small role in Rolf Silber's comedy "Kassensturz". He drew a lot of attention for the first time in 1991 as Schimanski's antagonist in "Der Fall Schimanski", the last "Tatort" episode with detective Horst Schimanski, played by Götz George. One year later, Rohde made his final breakthrough with a small, but downright memorable role of matey pleb Bierchen in Sönke Wortmann's comedy "Kleine Haie" ("Acting It Out") – a role type that Rohde played in numerous films during the following years, for instance, as a coarse, gay butcher in "Der bewegte Mann" ("Maybe, Maybe Not", 1994), as a security guard in Wolfgang Becker's "Das Leben ist eine Baustelle" ("Life Is All You Get", 1997), or as a mailman running amok in "St. Pauli Nacht" (1999). These and countless other roles (to date, Rohde has appeared in more than 100 TV and movie productions) have turned him into one of the most popular actors in the German film business.

But Rohde has proven time and again that he is more than the likeable pleb, for instance, with his portrayal of Emil Jannings in the Marlene Dietrich biopic "Marlene" (2000), with the title role in the TV drama "Richard Tauber – Dein ist mein ganzes Herz" (2003), or as drillmaster in the award-winning disaster movie "Das Wunder von Lengede" ("A Light in Dark Places", 2003). Since 2003, Rohde plays one of the leading roles as detective Erich Bo Erichsen in the ZDF crime film series "Nachtschicht".

In the movie season 2009/2010, Rohde will be seen in three substantial historic roles on the movie screen: In Ludi Boeken's drama "Unter Bauern" ("Among Peasants", 2009), he plays the German Jew Menne Spiegel who hides from the Nazis in a family of peasants, in "Schweitzer", Gavin Millar's film about the life of Albert Schweitzer that opens in cinemas in December 2009, he plays the role of Albert Einstein, and in Oskar Roehler's film "Jud Süß – Film ohne Gewissen" that opens in theatres in 2010, Rohde stars in the role of German folk actor Heinrich George.

Rohde remained one of the most active actors on the German film and television scene in the period that followed: in the youth film "Freche Mädchen 2" ("Cheeky Girls 2", 2010) he played a math teacher, in Steven Soderbergh's virus thriller "Contagion" (USA 2011) he was the head of the World Health Organization, and in the comedy "Kein Sex ist auch keine Lösung" (2011) he played the boss of an ailing advertising agency.

For his portrayal of a pompous escape king in the thriller "Alleingang" (2012, TV) he was awarded the German Actors' Prize and the Bavarian Television Prize. In the same year, he played leading roles in three feature films: in the children's mystery story "Fünf Freunde" ("The Famous Five") he embodied a good-natured village policeman, in the children's film "Sams im Glück" he reprised the role as the best friend of the protagonist Herr Taschenbier for the third time and in Ralf Huettner's comedy "Ausgerechnet Sibirien" ("Lost in Sibiria") he played the old school friend of a pedantic logistics expert (Joachim Król).

In 2013, Rohde appeared on the big screen as a strict father in the ironic "Im weißen Rössl - Wehe du singst!". On TV he played a miner in the ensemble of the disaster film "Helden - Wenn dein Land dich braucht" ("Heroes"), the head of the Berlin homicide squad in the crime thriller "Mantrailer - Spuren des Verbrechens" and in the social comedy "Ein Schnitzel für Alle" a 1-Euro-jobber with a not quite legal business idea. In 2014, Lars Becker cast Rohde in his neighborhood comedy "Wir machen durch bis morgen früh" (TV) in a signature role as the Reeperbahn big shot Rocky, and for Gregor Schnitzler, Rohde played an impulsive publisher in the romantic comedy "Das Lächeln der Frauen" (2014, TV). In the comedy "Die Lichtenbergs - zwei Brüder, drei Frauen und jede Menge Zoff" (2014, TV) he almost stole the show from lead actor Axel Prahl as a crude debt colletor.

Rohde received much critical praise for his role in the "Tatort" entry "Das Haus am Ende der Straße" (2015). In the feature-length episode he portrayed a lonely ex-police officer who locks three young burglars accused of manslaughter in his basement to take the law into his own hands. For this role he won the Hessian Film Prize. Shortly afterwards, Rohde displayed a more family-friendly side in the movie "Winnetous Sohn" ("Winnetou's Son", 2015), playing a sheriff in a Karl May stage show.

Apart from minor roles as a drunkard in "Taxi" (2015) and as a religious leader in the Danish thriller "Flaskepost fra P" ("Redemption", 2016), Rohde was involved exclusively in TV productions between 2015 and 2018. In the four-parter "Mörderisches Tal - Pregau" (DE/AT 2016), for example, he played a loner in Upper Styria who gets caught between the fronts of two hostile family clans. Lars Becker cast him as a narrow-minded mayor in the much-praised social drama "Der mit dem Schlag" (2016). He also appeared in the sequels of the "Schnitzel" TV film series about two unemployed best friends in 2017 and 2019, as well as in the mini-series "Ohne Schnitzel geht es nicht" (2019), which is based on the films. In addition, he continued to play a leading role as a detective in Lars Becker's crime series "Nachtschicht".

On the big screen Rohde appeared in the Frank Goosen film adaptation "So viel Zeit" ("Comeback", 2018) alongside Jürgen Vogel and Jan Josef Liefers as a member of a former up-and-coming band that is trying a late comeback. In the children's mystery story "Die Drei !!!" ("Three !!!", 2019) he played the owner of a run-down harbour pub.