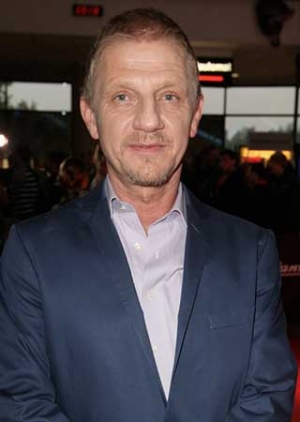 At the world premiere of "Das Hochzeitsvideo" on May 2, 2012 in Cologne

Sönke Wortmann was born August 25, 1959, in Marl. After his graduation from high school, he initially aimed for a career as a professional football player but ended his career after three years despite promising results for the lack of lasting ambition. He then started to study sociology but soon realized that this was not his vocation, either. Thus, he successfully applied at Munich's Hochschule für Film und Fernsehen (HFF) in 1983/84. At HFF, Wortmann finished several short films, including "Nachtfahrer" (1985) that won a special award at London's Royal College of Art where Wortmann studied for one year, and the 50-minute long film "Drei D" (1988), an ironic-reflexive film within a film about a film student who shoots his graduation film about a film student who shoots his graduation film, that was nominated for the Student Academy Awards.

After his graduation in 1988, Wortmann kept afloat with occasional jobs, for instance as a cab driver, and was seen as an actor in the TV series "Eine glückliche Familie".

In 1990, Sönke Wortmann made his feature-length debut with the award-winning TV comedy "Eine Wahnsinnsehe", starring Barbara Auer and Thomas Heinze. One year later, he directed the comedy "Allein unter Frauen" ("Alone Among Women"). Originally produced as a TV broadcast, the film about a macho who by necessity has to find accommodation in a women's flat share found a distributor and turned out to be a box-office hit.

His second film for the movie screen, "Kleine Haie" ("Acting It Out"), about the adventures of three penniless drama students, also turned out to be a box-office hit and garnered a certain cult following: In several German movie theatres, the film was shown for a whole year. Furthermore, leading actors Jürgen Vogel, Kai Wiesinger, and Gedeon Burkhard, as well as Armin Rohde in a supporting role, shot to fame because of their appearances in the film.

Yet, Wortmann did not do himself a favor with his next film. Although the road movie "Mr. Bluesman" (1993) featured an international cast, it hurt Wortmann's reputation as Germany's new prodigal director, received mainly negative reviews and even flopped at the box office.

But already one year later, Wortmann landed one of the greatest box-office hits of post-war German cinema: "Der bewegte Mann" ("Maybe, Maybe Not"), produced by Bernd Eichinger and based on a comic by Ralf König, picked up the basic principle of "Allein unter Frauen" and put a Munich super macho in a gays' flat share. The amiable and quirky comedy attracted more than 6.5 million viewers to German movie theatres and won the 1995 Ernst Lubitsch award.

Wortmann's next film, the star-studded film version of Hera Lind's novel "Das Superweib" ("The Super-Wife", 1996), also turned out to be a box-office hit despite receiving fairly negative reviews. However, his film version of "Der Campus" ("Campus") written by Dietrich Schwanitz, a satire about a university professor (Heiner Lauterbach) who is wrongly accused of raping a female student and is in danger of drowning in the undertow of "political correctness" and his spotlight seeking colleagues, did not meet the success of its predecessors.

Furthermore, Wortmann's ambitious ensemble tragicomedy "St. Pauli Nacht" (1998) flopped at the box office despite receiving positive reviews. Wortmann then directed the comedy "Der Himmel von Hollywood" ("The Hollywood Sign", 2001) in the United States. Although the film featured a cast of veteran Hollywood performers including Tom Berenger, Rod Steiger, and Burt Reynolds, it received devastating reviews and did not enter the movie screen until mid-2004 after Wortmann had celebrated another box-office hit with "Das Wunder von Bern" ("The Miracle of Bern", 2003) – however, the film still did not turn out as a success.

In contrast, Wortmann's epic about the fictitious surrounding circumstances of the unexpected world cup victory of the German national football team in Bern in 1954 received positive feedback from critics and movie goers alike. The film won the Film Award in Silver as "Best film" at the 2004 German Film Awards. Furthermore, Sönke Wortmann won the 2004 Bavarian Film Award as "Best director".

This film (as well as his beginnings as a football player) turned Wortmann into Germany's "soccer film" expert. Thus, he was authorized to accompany the German national football team with his camera during the entire tournament of the 2006 Football World Cup in Germany. The documentary film "Deutschland. Ein Sommermärchen" ("Germany: A Summer's Fairytale", 2006) that besides its look "behind the scenes" also captures the atmosphere among the fans turned out to be an enormous box-office hit with more than four million viewers. Furthermore, the film won the Grimme Award in the category "Documentary/Cultural".

For this next project, Sönke Wortmann turned to a completely different topic – although he got around to the project rather by accident: After the production company Constantin-Film had removed the original director Volker Schlöndorff from the film version of the best-selling novel "Die Päpstin" ("Pope Joan") by Donna Woolfolk Cross because of differences, Wortmann was put in charge of directing the historical drama. In "Die Päpstin" (2009), Johanna Wokalek embodies the legendary woman who disguised as a man was believed to be elected pope in the 9th century. The film turned out to be a box-office success and was nominated for four German film Awards.

Wortmann directed the comedy "Hochzeitsvideo" (2012) before helming the much-anticipated adaptation of Charlotte Roche's bestselling novel "Schoßgebete" ("Wrecked", 2014). His next project was "Frau Müller muss weg" ("Ms. Mueller Must Go", 2014), a comedy about a parent-teacher meeting which spins out of control.

Wortmann's next project was the documentary "Deutschland. Dein Selbstporträt" (2016), which was entirely made from amateur footage submitted by German citizens. After helming the TV miniseries "Charité" (2017) about the famous Berlin hospital of the same name, Wortmann directed "Sommerfest" ("A Summer Affair", 2017), an adaptation of the eponymous novel by Frank Goosen.

This film was not a big hit with audiences, but Wortmann had another office success with his next comedy: "Der Vorname" ("How About Adolf?", 2018), based on the French stage play "Le prénom", is about a middle-class, intellectual couple who shock their friends by deciding to name their son Adolf.

"Contra," Wortmann's remake of the 2018 French comedy "Le Brio," was scheduled to open in fall 2020, but due to the Corona pandemic, its release has been pushed back to fall 2021. The comedy tells the story of a university professor who is ordered to assist a female student with an Arab immigrant background as a coach for a debate competition because of sexist and racist remarks. Even before its release, the lead actress Nilam Farooq won the Bavarian Film Award 2021.