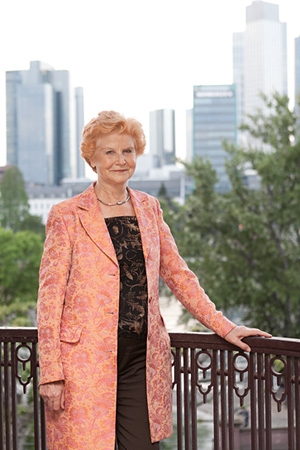 Irmgard Hermann, born October 4, 1942, in Munich, became a publishing clerk after finishing school and worked as a secretary for the ADAC when she met Rainer Werner Fassbinder in 1966. In the same year, Hermann already starred in her debut role in Fassbinder"s short film "Der Stadtstreicher" ("The City Tramp"). Together with Fassbinder and Hanna Schygulla, Hermann was a founder of the "action-theater" which later became the "antiteater". Beyond their professional relation, Hermann soon became one of Fassbinder closest confidants.

Until 1975, Irm Hermann starred in almost all of Fassbinder's movie and theatre productions, mainly in key supporting parts as the narrow-minded, square, and frustrated woman or wife. In 1972, Hermann won the German film award for her part as Irmgard Epp in "Händler der vier Jahreszeiten" ("The Merchant of Four Seasons"), her sole leading role in a Fassbinder film.

In 1975, Hermann ended her close collaboraton with Fassbinder and moved to Berlin. Thus, in the beginning of the 1980s, she only participated in two more Fassbinder films: "Berlin Alexanderplatz" and "Lili Marleen". But she still appeared in numerous theatre, film, and TV productions and starred in several films by renowned directors, for instance in Werner Herzog's "Woyzeck" ("Werner Herzog's Woyzeck"), in Hans W. Geissendörfer's "Ediths Tagebuch"("Edith's Diary"), in Ulrike Ottinger's "Johanna D'Arc of Mongolia" ("Joan of Arc of Mongolia") and others, and in Christoph Schlingensief's "Das deutsche Kettensägenmassaker" ("Blackest Heart") and "Die 120 Tage von Bottrop". In 1983, Hermann won another German film award for her performance as a cell mate of Sophie Scholl in Percy Adlon's "Fünf letzte Tage" ("The Five Last Days").

Hermann also appeared in numerous TV series such as "Tatort", "Polizeiruf 110", "Unser Lehrer Dr. Specht" or "Ein starkes Team". In the 2000s, Hermann also starred in several films, for instance in Peter Timm's "Mein Bruder ist ein Hund" ("My Brother Is a Dog", 2004), or in Dito Tsintsadze's "Der Mann von der Botschaft" ("The Man from the Embassy", 2006). In Max Färberböck's "Anonyma - Eine Frau in Berlin" ("A Woman in Berlin", 2008) about the systematic rape of German women by Red Army soldiers, she played a widow. For this performance she was nominated for the German Film Award 2009 as best supporting actress.

Throughout her life, Hermann never let go of the theatre either, as her engagements in productions by Christoph Marthaler show, for example  in "Tessa Blomstedt gibt nicht auf" at the Volksbühne in 2014 or in at the Hamburger Schauspielhaus in "Glaube Liebe Hoffnung", "Die Wehleider" and "Der Entertainer" in 2016/17.

In addition to her work as an actress, Irm Hermann was also frequently involved in audio book productions. She received the German Audio Book Award 2009 for her role as Hermann Göring's wife in "Enigma Emmy Göring". Her last role as narrator Dorothy was in 2019 in the SWR radio play production "Der Zauberer von Ost", which is based on the plot of the famous children's book "The Wizard of Oz", but revolves around the long-time director of the Berlin Volksbühne, Frank Castorf.