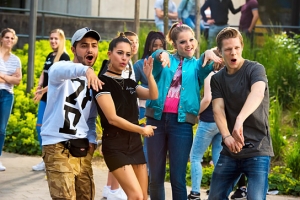 It's time for school as the Goethe Comprehensive reopens its doors and energizes its metal detectors to welcome those keen and energetic young minds ready to learn and ... Nah! That's somewhere else! This is the politically incorrect third and final part of the now famously successful trilogy, where Mr. Müller and his problem kids Chantal, Danger and Co. once again take up arms against their sworn enemy, the German education system.

The overall success of the "Fack Ju Göhte" series is without equal in the German film landscape. With a total of some 15.1 million viewers the first two parts are among the most successful German films ever.