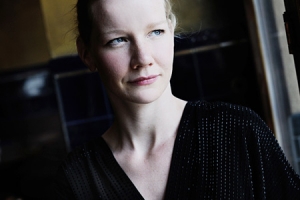 Sandra Hüller, born 1978, attended actor's training at Berlin's Hochschule für Schauspielkunst Ernst Busch from 1996 to 2000. From 1999 to 2001, Hüller was a cast member at Theaterhaus Jena. After a brief stint at Schauspielhaus Leipzig, Hüller went to Theater Basel in 2002 and participated in productions of "Faust I", "Romeo and Juliet", "As You Like It", and "Das goldene Vlies". In 2003, Hüller was named "Best new actress" by the theatre magazine "Theater Heute".

Hüller then appeared in several short films – "Nicht auf den Mund" by Kathrin Feistl, "Kleine Schwester" by Thomas Adamicka, and "Kühe lächeln mit den Augen" by Johanna Icks – and made her feature film debut in Hans Christian Schmid's drama "Requiem" that is set in provincial Southern Germany. Her portrayal of the mentally instable student Michaela who becomes the victim of a religious exorcism, won Sandra Hüller the Bavarian film award as "Best new actress", and the German film award as "Best actress". Furthermore, Hüller won the Silver Bear as "Best actress" for her role in "Requiem" at the 2006 Berlin international film festival.

Despite the success, Hüller focused on her work in the theatre in the following years. Yet she regularly appeared in ambitious short and feature films, including the award-winning drama "Madonnen" (2007), the biopic "Fräulein Stinnes fährt um die Welt" (2008) and the period piece "Henri 4" (2010). She played a physician who deliberately begins intimate affairs with her patients in Nanouk Leopold's psychological drama "Brownian Movement" (2010) and a woman shocked by the unexpected suicide of her partner in Jan Schomburg's "Über uns das All". For the latter two, Sandra Hüller received a special acting prize at the 2011 Ludwigshafen Festival of German Film.

After a supporting role in the British production "Strings" (2012), Hüller played an overly ambitious, but rather untalented documentary filmmaker in the surrealist satire "Finsterworld" (2013) and appeared as the evil fox in a TV adaptation of "Picocchio" (2013).

"Vergiss mein Ich" (2014) reunited Hüller with director Jan Schomburg and saw her playing the friend of a woman who lost all her memory.

She also played in Jessica Hausner's "Amour Fou", which premiered in the Cannes series "Un Certain Regard" in 2014.
Hüller received rave reviews for her leading role in Maren Ade's "Toni Erdmann" (2016). In the film she played a career-minded management consultant in Bucharest who gets a surprise visit from her prankster father, who throws her career life off balance. In the competition at the Cannes Film Festival, "Toni Erdmann" advanced to become the absolute favourite with the audience and critics. It was awarded the FIPRESCI Prize for Best Film in Competition and was released in German cinemas in July 2016. For her role in the film, which went on to win numerous awards, Hüller received the Bavarian Film Prize, the German Film Critics' Prize and the Critics' Prize at the Toronto International Film Festival, among others. She was also awarded Best Actress at the German Film Prize 2017.

After another comedic role in the third part of Bora Dagtekin's box-office hit "Fack Ju Göhte" ("Suck Me Shakespeer 3"), Hüller appeared in Thomas Stuber's laconic supermarket drama "In den Gängen" ("In the Aisles"), which was presented in the competition of the Berlinale 2018. In the film she portrays an employee from the confectionery department with whom the protagonist, played by Franz Rogowski, falls in love. For her performance she was again nominated for the German Film Award in the Best Female Supporting Role category.

In Markus Goller's road movie comedy "25 km/h" (2018) she appeaered as the secret childhood love of a grieving man (Bjarne Mädel). Throughout her career, Hüller has always been active as a stage actress. Since the 2018/2019 season she has been a member of the Bochum Schauspielhaus ensemble. There she was voted actress of the year 2019 for her portrayal of Penthesilea in the critics' survey conducted by theatre magazine Theater heute. In the same year she received the Gertrud-Eysoldt-Ring for her title role in "Hamlet". In 2020 she was awarded the Theaterpreis Berlin.

Two films starring Sandra Hüller were shown at the Berlinale 2020: In the Panorama the mobbing and racism drama "Exil" ("Exile") by Visar Morina and in the Perspektive Deutsches Kino section of the festival the mystery psychodrama "Schlaf" ("Sleep") by Michael Venus.

Lighter fare was the bizarre comedy "Das schwarze Quadrat" ("The Black Square") for which Hüller appeared in front of the camera in Spring/Summer 2020: the film tells the story of two art thieves who steal the famous Malevich painting "The Black Square" on behalf of a mysterious collector.