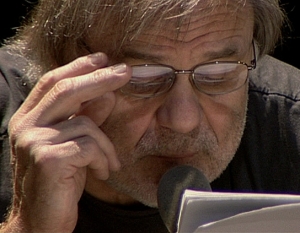 Josef Bierbichler, born on April 26, 1948, in Ambach at the Starnberg Lake, worked in a hotel before he was accepted to the renowned Otto Falckenberg drama school in Munich at the age of 23. In the mid-1970s Bierbichler met film and theatre director Herbert Achternbusch. They became close friends and for the following years intensively worked together for films such as "Bierkampf" ("Beer Chase") or "Heilt Hitler". Bierbichler also worked with directors such as Werner Herzog ("Herz aus Glas" - "Heart of Glass"), Tom Tykwer ("Die tödliche Maria" - "Deadly Maria"), Michael Haneke ("Code unbekannt" - "Code Unknown"), Hans Steinbichler ("Hierankl", "Winterreise" - "Winter Journey") and Jan Schütte ("Abschied" - "The Farewell").

Most of those parts stand out for Bierbichler's remarkable physical presence but he also tends to lend his characters an air of melancholy and reflectiveness. His performance as short-tempered, yet melancholic Franz Brenninger in "Winterreise" won him the 2007 German Film Award.

Bierbichler received another nomination for his portrayal of a painter who encounters a grief-stricken family in Caroline Link's 2008 drama "Im Winter ein Jahr" ("A Year Ago in Winter"). The same year, he played the titular character in "Der Architekt" ("The Architect"), which garnered him the Best Actor Award at the Filmfestival Türkei-Deutschland. After starring opposite Josef Hader in the dark-humored thriller "Der Knochenmann" ("The Bone Man", AT 2009), Bierbichler played a despotic patriarch who brutally abuses his children in Michael Haneke's multiple award-winning period drama "Das weiße Band - Eine deutsche Kindergeschichte" ("The White Ribbon", 2009).

Besides his TV and film work Bierbichler is quite often seen on stage. He also has his say in social and political matters. In 1999 for instance, he furiously commented on the war in Kosovo. In 2004, Bierbichler published his autobiographically influenced book "Verfluchtes Fleisch", a critical assessment of the established culture and theatre scene. In 2011, the novel "Mittelreich" followed.

Following his turn as a philandering writer in "Brand" (DE/AT 2011), Bierbichler played the lead in the six-part TV series "Verbrechen", which garnered him nominations for the Bavarian Television Award and the Austrian Film Award "Romy". He next had a supporting role in Caroline Link's "Exit Marrakech" (2013) and starred in the sports biopic "Landauer - Der Präsident" (2014, TV). In "Schau mich nicht so an" ("Don't Look at Me That Way"), which premiered at the 2015 Munich Film Festival, Bierbichler plays a man who ends up in a conflicted romantic triangle with his daughter and her female lover. The award-winning film was released theatrically in Germany in June 2016.

The same year, Bierbichler was awarded the Fontane-Preis for his 2011 novel "Mittelreich", whicht he subsequently adapted into a screenplay for his second directorial feature Titel "Zwei Herren im Anzug". The 2018 release was shot at Bierbichler's inn at Lake Starnberg and stars himself and his son Simon Donatz.

Josef Bierbichler is the father of three children. Besides being an actor and writer he is also a spare-time farmer.