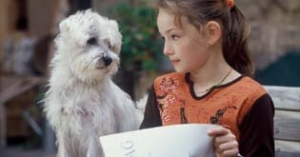 My Brother is a Dog

There′s nothing that ten-year-old Marietta wants more for her birthday than a little dog. But what does she get instead? A silly old rock. Except that this rock is special: it fulfills its owner's greatest wish. And sure enough, one morning Marietta wakes up to find a little dog waiting to play with her.

But when she notices that her four-year-old brother Tobias is missing, she realizes that he has been transformed into the dog! With their parents away and grandma too obsessed with cleaning to notice that anything's wrong, Marietta begins to feel lonely and does her best to turn "Tobi" the dog back into "Tobias" the boy. But Tobias apparently likes being a dog, especially after a film crew discovers the talented mutt and offers him a role in a production. Back from their vacation, Marietta's parents desperately begin to search for Tobias, since they obviously don't believe their daughter's tall tale. Realizing how much she misses Tobias, Marietta gathers all her courage to rescue him from the canine chaos he's gotten himself into and to bring her whole family happily back together again.

Family entertainment has always been a specialty of director Peter Timm, from the hit "German reunification" comedy "Go Trabi Go" (1991) to the successful children's feature "Rudi the Racing Pig" (1995), and to the enchanting "My Brother is a Dog" with its irresistible young leads, both human and animal!