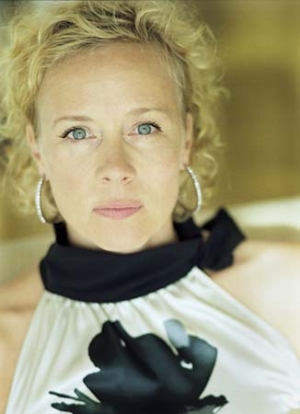 Katja Riemann was born November 1, 1963, in Kirchweyhe near Bremen. From 1984 to 1987, she took actor's training at Hanover's Hochschule für Musik und Theater and at Munich's Falckenbergschule. Riemann gave her first performances at Munich's Kammerspiele and at Berlin's Schillertheater and made her TV debut in 1986 in the historical TV movie "Sommer in Lesmona" directed by Peter Beauvais, a role which won her the Adolf Grimme prize.

In 1993 Riemann made her breaktrough performance in Katja von Garnier's surprisingly successful movie "Abgeschminkt" ("Making Up"). She then starred alongside Til Schweiger in Sönke Wortmann's romantic comedy "Der bewegte Mann" ("Maybe, maybe not") and Rainer Kaufmann's "Stadtgespräch" ("Talk of the Town"). Both movies saw Riemann in the role of an emancipated woman whose emancipation does not pose a threat to anyone and precisely ends at the point where she finds a strong man she can subordinate to.

Critics have questioned the similarity of her parts in Riemann's popular movies but generally tend to be sympathetic towards her performances: "Viewers do not envy Katja Riemann. In her films, she comes across as an everyday woman. Her private life does not take place among rich producers and millionaires and her attractiveness does not overextend the viewers' grasp" (Mahrenholz, 1996).

Various appearances in thematically different movies followed, like in Margarethe von Trotta's psychodrama "Ich bin die Andere" ("I am the other Woman" 2006) or Alain Gsponer's "Das wahre Leben" ("Bummm! - Your Family, the Battlefield" 2006), for which she received the Grimme price. In Dani Levy's Satire "Mein Führer" ("My Führer – The Truly Truest Truth About Adolf Hitler" 2007) Riemann again played Eva Braun; she continued with roles in other cinema productions like Rainer Kaufmann's "Ein fliehendes Pferd" ("Runaway Horse" 2007) and Hardi Sturm's willful Science-Fiction comedy "Up! Up! To the sky" (2008). Then she appeared as supporting actress in productions like the expensive two-part TV movie "Vulkan" (2009) or "Die Grenze" (2010, also TV). In 2011, Riemann and Olli Dittrich played lovers in four individual, but connected episodes of the cinema comedy "Die Relativitätstheorie der Liebe".

In 2012, Riemann could be seen in three very different movies: in the comedy "Türkisch für Anfänger", she had a cameo appearance as a scientist who researches on a lonely island populated by cannibals, in "Ausgerechnet Sibirien" she is the divorced wife of a logistician (played by Joachim Król), who is forced to go to Siberia, and in the drama "Der Verdingbub" ("The Foster Boy" 2011) she gives a stunning performance as a cold-hearted farmer, who holds an orphan boy like a slave on her yard.

Following her turn as a former Red Army Faction terrorist in Nina Grosse's drama "Das Wochenende" ("The Weekend", 2013) and lead roles in the TV productions "Clarissas Geheimnis" (2012) and "Verratene Freunde" (2013), she played a strict school principal in Bora Dagtekin's box office hit "Fack Ju Göhte" ("Suck Me Shakespeer"). For her performance, she received a Best Supporting Actress Nomination at the 2014 German Film Award.

Katja Riemann was able to display her comic skills once more in "Er ist wieder da" ("Look Who's Back", 2015), playing an ambitious CEO of a TV station. Director Laura Lackmann cast her as the main character's mother for her film "Mängelexemplar" ("Too Hard to Handle", 2016) and she starred in a supporting role as a pop singer in the romantic comedy "SMS für dich" (2016). In 2016, Riemann starred in three TV productions, before she returned to the big screen in 2017 acting opposite Iris Berben and Emilia Schüle in the comedy "High Society". In the same year, she also appeared in "Fack ju Göhte 3" ("Suck Me Shakespeer 3") and Margarethe von Trottas comedy "Forget About Nick".

In 2018 Riemann had a leading role in Oskar Roehler's much-discussed Thor-Kunkel film "HERRliche Zeiten", a satire about a wealthy landscape architect who hires two "house slaves" together with her husband. In the same year, the drama "Goliath96" premiered at the Hofer Filmtage, in which Riemann played a single mother whose adult son has been locking himself in his room for over two years. The film was theatrically released in April 2019, after which Riemann played leading roles in the family film "Sprite Sisters - Vier zauberhafte Schwestern" (2019, directed by Sven Unterwaldt Jr.) and in the drama "Valeska" (DE/AT/BE 2019, directed by Jakob Moritz Erwa) about the story of the first transgender model Valeska Réon.