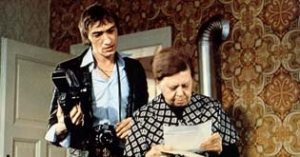 The film begins as a sequel to "Warum läuft Herr R. Amok?" ("Why Does Herr R. Run Amok?"): Hermann Küsters, who has been working at a tire factory in Frankfurt, shoots and kills a superior and then commits suicide after the company had announced mass layoffs at the plant. His wife, Mutter Küsters (Brigitte Mira), is at first completely helpless coping with this catastrophic event. Her son Ernst (Armin Meier), and his wife Helene (Irm Hermann) in particular, turn away from her because they do not want to be linked with the case of the "factory murderer".

Her daughter Corinna (Ingrid Caven), on the other hand, a night club singer, makes use of the sudden publicity to push her career. A magazine reporter (Gottfried John) who seems to be nicer than the mob of his colleagues publishes a particularly sensational, exxagerated, and defamatory article about the case. Mutter Küsters only finds consolation with Karl Thälmann (Kalrheinz Böhm), a journalist for the German Communist Party (DKP) newspaper "UZ", and his wife Marianne (Margit Carstensen): Both of them explain to her that although her husband′s deed was wrong because of its means, he had reasonable motives as the deed was the result of a decades-long repression at the workplace and a protest against the planned mass layoffs- Mutter Küsters then joins the DKP and explains her motives in a meeting: She feels to be taken seriously and complains about the fact that her husband did not have contact to the Communists to talk about his problems at work. "He is someone who has retaliated because he had been beaten all his life. But the way he did it was wrong... Now I want to make amends."

Mutter Küsters expects the DKP to help her rehabilitate her husband but when nothing happens she seeks help from an "anarchist" (Matthias Fuchs) who had promised to make her case known to the public with a political action. Together with some friends, he seizes the editorial office of the magazine that had published the false report . Horrified, and like in trance, Mutter Küsters has to witness that the terrorist takes hostages and demands the release of all political prisoners in Germany. On the way to their getaway car they get into a gun fight with the police and the terrorist and Mutter Küsters are shot and killed.