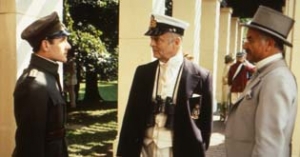 Kiel in 1918. The sailor′s revolt comes at the end of the first world war. Theodor Lohse, a conscientious young officer, confronts the mutineering sailors in defiance, and in vain. After being severely injured by a bayonet, he feels the revolutionaries are betraying their fatherland. After the war, in 1923, Lohse finds that mass unemployment and the many political parties confuse his reintegration into society.

He is introduced to the influential Baron von Rastschuk and joins a right-wing organization whose political program is to discredit dissenters and, if necessary, to liquidate them. In this group he comes across Benjamin Lenz, a Jew from Eastern Europe who, like him, spies for both the right and the left. When Lohse receives orders from his organization to put down a revolt by farm laborers, he brings about a massacre. The press celebrates him as a hero, his marriage to an aristocrat has been announced and he is appointed to the position of secretary of state in the Ministry of the Interior. There is nothing standing in the way of his career, were it not for Benjamin Lenz.