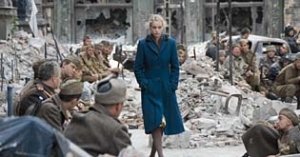 A Woman in Berlin

Berlin, April 1945, the last days of the war. In a partially destroyed building, people cower in the basement – and wait. They have survived the night-time bombing raids and the artillery bombardments. Most of them are women, and they have a foreboding of what awaits them. The Red Army is poised to march in and take Berlin.

Women in this building, like elsewhere in Berlin, become victims of rape. One of them is Anonyma, a journalist and photographer. She, however, re - fuses to see herself as a victim. Summoning up her courage and an unconditional will to defend her dignity, she reaches a decision. She will look for a "wolf", a Russian officer who will protect her from the other soldiers. In return, she will sleep with him – voluntarily. What she had least expected happens: she begins to take an interest in the polite, melancholic Russian officer Andrej, and it turns into a relationship that feels a bit like love. Still, there is a barrier between them that never lets them forget that they come from enemy camps…

The film by director Max Färberböck and producer Günter Rohrbach is based on the diary by an authoress who remained anonymous until her death, the only woman to write about the still taboo topic of the rape of German women by soldiers of the Red Army at the end of World War II. The book is a unique historical document. It caused a sensation worldwide and went to the top of the bestseller lists when it was re-released in Germany in 2003.