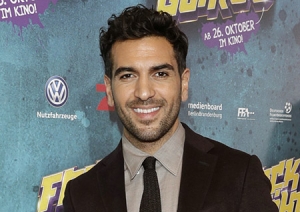 Elyas M'Barek was born in Munich on May 29, 1982. While still being a high school student, he was discovered as an actor and made his screen debut in a small role in Dennis Gansel's 2001 comedy hit "Mädchen, Mädchen" ("Girls on Top"). Following supporting roles in "Epsteins Nacht" ("Epstein's Night", 2002) and in TV shows like "Schulmädchen" (2004). He had his breakthrough playing the character Cem in the acclaimed TV series "Türkisch für Anfänger" (2005-2008).

He got his first leading role in a theatrical release with "Wholetrain", in which he played a graffiti artist. He then re-teamed with director Dennis Gansel for the drama "Die Welle" ("The Wave"). After parts in Til Schweiger's "Zweiohrküken" ("Rabbit Without Ears 2", 2009), Granz Henman's "Teufelskicker " (2010) and Uli Edel's "Zeiten ändern dich" ("Electro Ghetto", 2010), M'Barek starred as a laidback macho in Matthias Schweighöfer's directorial debut "What a Man".

In early 2012, Elyas M'Barek played opposite Nora Tschirner in the romantic comedy "Offroad". The same year, he also starred in the extremely successful feature film adaptation of "Türkisch für Anfänger". After turns in the tragicomedy "Heiter bis wolkig" (2012) and the fantasy film "Chroniken der Unterwelt – City of Bones ("The Mortal Instruments – City of Bones", 2013), Elyas M'Barek played a petty criminal who has to pose as a substitute teacher in Bora Dağtekin's suprise hit comedy "Fack Ju Göhte" ("Suck Me Shakespeer").

After playing the best friend of the titular hero in the big-budget screen adaption of "Der Medicus" ("The Physician", 2013), he portrayed a hacker in the cyberspace thriller "Who Am I - Kein System ist sicher" (2014). Next, M'Barek starred alongside Christoph Maria Herbst and Detlev Buck in the comedy "Männerhort", in which three men seek refuge from their wives in a dingy boiler room.

Also in 2014, he received the 'Medaille für besondere Verdienste um Bayern in einem Vereinten Europa' from the Bavarian State Minister for Federal and European Affairs, a medal of honor for his representation of Bavaria in a united Europe.

In February of 2015, M'Barek featured in the comedy "Traumfrauen", as the new crush of a cuckolded woman (Hannah Herzsprung). He was then nominated for the Deutscher Animationssprecherpreis at the Festival of Animated Film 2015 in Stuttgart for his voice acting in the children's film "Paddington" (UK 2014).

For "Fack ju Göhte 2" ("Suck Me Shakespeer 2") M'Barek returned in the role of the unconventional teacher and former crook Zeki. Much like its prequel, the film turned out a box office smash with 7.7 million admissions. In the subsequent year, M'Barek was part of the all-star cast of the comedy "Willkommen bei den Hartmanns" (2016) where he featured as a doctor and womanizer in a supporting role. Afterwards, he reprised his role of the casual teacher Zeki Müller in "Fack ju Göhte 3" ("Suck Me Shakespeer 3", 2017) and won the Most Popular Actor award at the Romy Gala in Austria, the country’s most important film prize.

With "Dieses bescheuerte Herz" ("This Crazy Heart", 2017) M'Barek went back to more serious roles: Based on a true story, the film tells about a superficial man who unexpectedly has to take care of a terminally ill teenager. Marco Kreuzpaintner then cast him in the leading role in the juridical drama "Der Fall Collini" ("The Collini Case") as a lawyer who defends the accused in a murder trial full of inconsistencies and open questions.

An huge box-office success was the social comedy "Das perfekte Geheimnis" (2019), about a dinner among friends where unpleasant truths are revealed during a supposedly harmless game.

The comedy "Nightlife" was released in theatres in early 2020 and re-united M'Barek and director Simon Verhoeven, who had worked together before in Verhoeven's "Willkommen bei den Hartmanns" ("Welcome to Germany"): In the role of a Berlin bartender whose first date with the woman of his dreams turns into a night full of adventure.