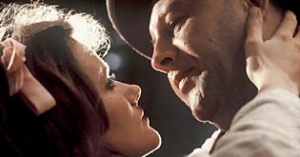 After being released from prison, Franz is determined to finally lead a decent life. But it is difficult to get used to living outside of prison again. In the local bar, he meets Reinhold, leader of a gang of criminals. Unable to convince Franz to join the gang, Reinhold gets him to take a drive with them one night.

When Franz realizes that they are on their way to a job, he refuses to participate and is thrown out of the car while it is still moving. Franz survives, but loses his right arm. Having now lost all faith and sure he′ll never make it on "the straight and narrow", Franz gives in and joins Reinhold’s gang. Franz′s new girlfriend Mieze, however, finds out what′s going on and starts making trouble. To get her out of the way, Reinhold tricks her into taking a drive with him and kills her. When Franz learns of Reinhold′s treachery, he grabs his revolver and heads to the local bar to confront the gang leader. But the bar is already swarming with cops… In court, Franz is acquitted and Reinhold is sentenced to 15 years in prison. Although he′s hit rock bottom, Franz still finds the strength to go on. Working as a street vendor selling tumbler toys on Alexanderplatz in Berlin, Franz has finally found happiness in a simple, but upright life.