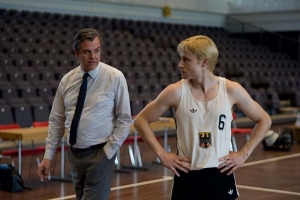 "Playoff" is inspired by the life of Ralph Klein, Israel's most famous ever basketball coach. In the film, the basketball coach Max Stoller becomes a national hero when he makes Maccabi Tel Aviv into European champions in the late 70s. But he becomes a national traitor equally as fast when he then accepts the against-all-odds job of turning the totally hopeless West German basketball team – of all people – into European winners!

Max always insists that Germany means nothing to him and that training their national team is just another job on his path to NBA glory. But things aren’t that simple as he refuses to speak German to the young players. When he discovers what happened to his own family in Germany in the 1940s, it is not what he had expected…