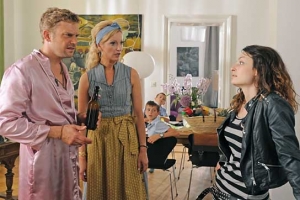 Basti, who is in his thirties, makes his living as a rickshaw driver in Munich. The bon vivant leads a happy-go-lucky style of life until one day, 17-year-old Dina is standing in front of his apartment claiming to be his daughter. As if that was not enough, she is also carrying a baby called Paul. Within the blink of an eye, the confirmed bachelor not only turns to be a father but a grandfather as well. However, Dina is not looking for any sort of parental care besides the financial part of it. Unfortunately, neither Basti, nor his gay father Lambert or his strict sister Thea are pampered in cash. Thus, Dina has no other choice but to stay in Munich with her child, of course, totally unsettling Basti's relaxed life. It is just a matter of time though, until the newly minted (grand) father and his equally chaotic daughter establish a tentative emotional bond.