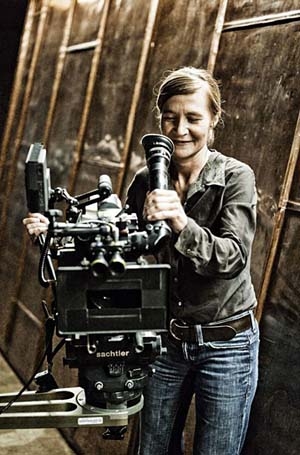 Born in Stuttgart on September 20, 1962, Judith Kaufmann spent most of her childhood in Berlin. She took an interest in photography at an early age and was accepted at the Staatliche Fachschule für Foto, Optik und Film (state college for photography, optics and film) in Berlin – better known as the SFOF – after graduating from secondary school. After working as camera assistant to cinematographer Konrad Kotowski on Thomas Brasch's film "Domino" in 1982, her focus shifted to camera work in film.

Kaufmann gained experience on numerous film and television productions, working as a camera assistant for about ten years – with Gernot Roll, Raoul Coutard, and Heinz Pehlke, among others – before first being hired as director of photography in 1991. She was responsible for the second camera on Wim Wenders' "In weiter Ferne, so nah" (Faraway, So Close!) (cinematographer: Jürgen Jürges) in 1992.

Judith Kaufmann has already received a number of awards for her work. In 2003 she was awarded the Bavarian Film Prize for "Elefantenherz" ("Elephant Heart") and the German Camera Prize for "Scherbentanz" ("Shattered Glass"). Her work in "Fremde Haut" ("Unveiled") was recognized with the Film Prize of the State of Hesse in 2005, and her overall achievements were honored with the Marburg Camera Prize in 2006.

The same year, Chris Kraus' acclaimed and multiple award-winning drama "Vier Minuten" ("Four Minutes") was released in Germany. For her work on the film, Kaufmann received her first nomination for the German Film Award. On the road movie "Vivere" (2007) and the much-discussed TV thriller "Wem Ehre gebührt" (2007) she again collaborated with "Fremde Haut"-director Angelina Maccarone. Kaufmann's penchant for films with political relevance was also evident in her next projects: "Feuerherz" ("Heart of Fire", 2008) deals with the fate of African child soldiers, "Ihr könnt Euch niemals sicher sein" (2008) is the story of a teenager who is suspected of having homicidal tendencies, and "Die Fremde" ("When We Leave", 2010) shows how a young Turkish woman living in Berlin is crushed by her conservative family's restrictive rules and oppressive traditions. Her innovative photography in "Die Fremde" garnered Kaufmann the Award of German Film Critics and the German Camera Award.

She then worked on Jo Baier's "Das Ende ist mein Anfang" ("The End is My Beginning", 2010), the movie adaptation of the memoirs of a Southeast-Asia correspondent working for German news magazine "Der Spiegel". Following Andres Veiel's "Wer wenn nicht wir" ("If Not Us, Who?", 2011), a film about Bernward Vesper and his fateful relationship to Gudrun Ensslin, Kaufmann once more was DoP in a Maccarone film: "Charlotte Rampling: The Look" (2012) is a portrait of the legendary British actress.