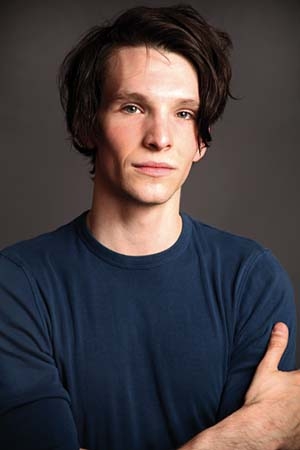 Sabin Tambrea, born 1984 in Romania, grew up in Hagen, Germany from the age of four. At the age of 12, he became a soloist in the children's choir of the Hagener Stadttheater and then joined the Landesjugendorchester North Rhine-Westphalia as a violinist.

Already before graduating from drama school, Tambrea was appointed to the prestigious Berliner Ensemble for the 2009/2010 season. There he appeared in productions of the Frank Wedekind classics "Spring Awakening" (Director: Claus Peymann) and "Lulu" (Director: Robert Wilson) as well as in the 2012/13 season in a production of Shakespeare's "Twelfth Night" (Director: Katharina Thalbach). After a small role in Christian Schwochow's movie "Die Unsichtbare" ("Cracks in the Shell", 2011), Tambrea was first seen in a lead role on screen in late 2012: In Marie Noëlle's and Peter Sehr's period drama "Ludwig II." he played the title role of the legendary Bavarian king. This performance earned him, among others, the Bavarian Film Award (Young Actor Award), the New Faces Award and a nomination for the German Film Award.

Other theatrical releases Tambrea starred in include the Second World War drama "Das große Heft" ("The Notebook", 2013), the modern Bible adaptation "Jesus Cries" (2015), and the romantic thriller "Ma folie" (FR/AT 2015), in which he starred as the jealous French lover of Alice Dwyer's main character (Dwyer and Tambrea also became a couple in real life).

Often Tambrea was cast as a sinister character or villain (mostly on TV). He starred as the diabolic SS Untersturmführer Hermann Reineboth in the TV adaptation of "Nackt unter Wölfen" ("Naked Among Wolves", 2015), and also played the bad guy in the period drama "Das Geheimnis der Hebamme" (2016). The acclaimed TV trilogy "Ku'damm 56" (2016) featured Tambrea in a starring role as the narcissistic, sexually violent son of a factory owner and in the first season of the agent series "Berlin Station" (2016) he played a killer called the ‘Thin White Duke’. Tambrea then got to play the good guy for a change in the TV thriller "Jack the Ripper – Eine Frau jagt einen Mörder" (2016), hunting the notorious London serial killer.

After a major movie role in the biopic "Marie Curie" (2016), as Swedish Ambassador August Gyldenstolpe, Tambrea played a pillaging Neanderthal in the Stone Age drama "Der Mann aus dem Eis" ("Iceman", 2017), followed by the title role in the TV Christmas movie "Rübezahls Schatz" (2017). In addition, Tambrea continued to participate in several stage productions as a member of the Berliner Ensemble, such as "Peter Pan" (2013, title role), "Die Kannibalen" (2014) and "Prinz Friedrich von Homburg" (2017, title role). In 2017, he left the ensemble and has been mainly focusing on cinema and television work since.

In 2018, he revisited the role of the egomaniac factory son Joachim Franck for "Ku'damm 59". In the same year he also starred in Stefan Ruzowitzky's Hesse adaptation "Narziss und Goldmund" ("Narcissus and Goldmund", planned start: January 2020) as Narcissus. In early 2019, the youth film "Ostwind - Aris Ankunft" was released in cinemas, with Tambrea playing an important supporting role as an unscrupulous horse trainer.

Sabin Tambrea lives in Berlin and has been married to Alice Dwyer since 2018.