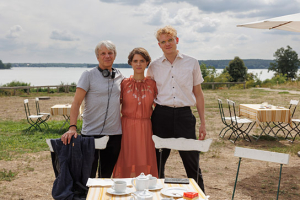 Andreas Dresen, Liv Lisa Fries, Johannes Hegemann (left to right) on the set of "In Liebe, eure Hilde" on August, 22 2022

From Hilde, With Love

Drama based on real events. Berlin, early 1942, World War II. The 22-year-old doctor's assistant Hilde Coppi has joined a resistance group that will later be called the "Rote Kapelle" (Red Chapel). There she meets and falls in love with her future husband Hans. Between the group's actions and constant danger of arrest, the two spend a magical summer together. Eventually, they are both arrested, Hilde is sent to prison pregnant and eventually gives birth to her child while in custody. Shortly afterwards she is sentenced to death. In her last months, motherhood helps her not to despair.